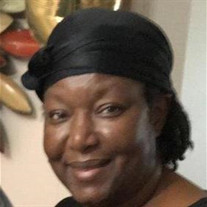 Her Journey Winnie was born on April 8, 1963 to Peter and Edris Samuels in the beautiful parish of Dundee, Westmoreland, Jamaica. She was the second oldest of seven children. Winnie was brought up in a Christian home by both of her parents and she was Baptize at an early age at the Cheviot Hill Bible Way Church. Winnie attended and graduated from Cambridge High School in 1979. During her years at Cambridge she was very clever and active in sports, band, and the school chorus. She attended several festivals for the school as a featured soloist, where she won several medals for her performance and for the school. Winnie also ran track and field and was wanted by a lot of school to compete for them, but due to lack of finance, she was unable to pursue her love of sports or further her education. Growing up in the Samuels household, the child of an evangelist, church wasn’t an option. Winnie was very active in church where she loved to sing. You can often find her and her oldest sister, Ionie singing duets at other churches all over the parish. People would travel from all over to hear them sing. Also her brother Peter played the guitar. She would often win Bible Quiz contest from different church convocation. Winnie left her family home at an early age to go to Montego Bay to live with her uncle, Vincent McNeil. She attended the Kings Chapel Pentecostal Church. During her time in Montego Bay she loved her sports. She was a big fan of Seba United Football (Soccer), where she never missed a game and she never paid to go in. In her later years, she enjoyed watching basketball, where Steph Curry and Dwayne Wade were her favorite players. Winne was also a strong Advocate for the Jamaica Labor Party (JLP). You could find her working tirelessly during the election. In 1982, Winne began her motherhood with her first born Simone. Then Sharlene and Deano were born several years later. As a single mother, she worked tirelessly to make sure her children were well taken care of. She worked in the hospitality field in her earlier years including the Sangster International Airport, Wyndam Rose hall, Sandals and a lot more. Winnie, migrate to the US in 2000 and resided in Michigan for only 3 weeks. She relocated to Miami Florida, and It did not take long to join the church and call it home for 16 years, Pentecostal Tabernacle International (PENT TAB). During her time in Florida, she developed a passion for the elderly and special needs. She worked for the Rehab Network. Winnie wanted to be close her children and grandchildren so she relocated to Delaware. She continued with her passion of working with the elderly and special needs. She then gained employment with Senior Helper and then later Chimes Inc. Winnie also continue her walk with the lord and joined and became an active member of First Church Of Our Lord Jesus Christ, under the leadership of Pastor Gino Jenny’s where she served as an Usher until her sudden passing. Winnie, was a remarkable woman. A mother, grandmother, sister, aunt, cousin and friend. She was a caring, loving, helpful, and a sociable person. You name it! That was Winnie! You could never have a regular conversation with Winnie, without talking about the lord Jesus and making sure you get Baptize in Jesus name. Winnie loves to travel, she never miss a trip, she would just jump in her car and drive far distance, especially church trip for the most part, she could not get enough about God and his teachings. She was the go getter of the family. She was the one who would find all her family members outside of her immediate family to meet each other. For Example: she sought and found her father and mother’s sibling’s children, so that they could meet each other. She was a woman to speak her mind, whether you like it or not, however in the same token, she could not hold a grudge. Winnie loved people, her family but most of all, she loved God. Winnie, she leaves to cherish her memory; Two daughters, Simone Brown and Sharlene Harvey; One Son, Johann (Deano) Weatherly. Four Grandchildren, Alydia, Akaylia, Amaya, and Athan. Three Sisters: Ionie Parker, Milicient Samuels,Viola Samuels and Three Brothers, Peter Samuels, Joseph Samuels, and Robert Samuels. Many nieces, nephews, cousins, family and host of friends. Lovely Submitted, The Family

Her Journey Winnie was born on April 8, 1963 to Peter and Edris Samuels in the beautiful parish of Dundee, Westmoreland, Jamaica. She was the second oldest of seven children. Winnie was brought up in a Christian home by both of her parents... View Obituary & Service Information

The family of Winniefred Samuels created this Life Tributes page to make it easy to share your memories.

Send flowers to the Samuels family.