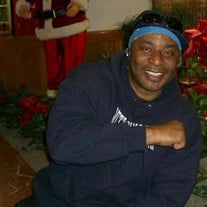 Trace M. Waller, Sr. was born on January 30, 1963, in Halifax County, Virginia to the late Warren Waller, Sr., and Vernell Word Waller. He departed this life suddenly on January 9, 2022, in Green Cove Springs, Florida, where he resided since 2015. Trace’s parents, along with his 7 siblings, relocated from Halifax County to Newark, Delaware in April 1968. Trace attended Newark High School where he developed a love and passion for football and basketball, becoming a multi-sport athlete. After graduating high school in 1981, his outstanding ability to play football earned him a scholarship to Delaware State College where he played defensive end for the Hornets. During his matriculation, he joined an African American fraternity called W.I.N.E Psi Phi, which helped promote political awareness and equality. He obtained a Master of Arts in Criminal Justice (Parkwood University), a Bachelor of Science in Criminal Justice, and an Associates of Arts in Business Administration (American Intercontinental University). In 1985, Trace began his professional career at the Department of Corrections as a Staff Training Relief Officer. During his tenure, he displayed a commitment to his profession by having over 20 years of perfect attendance and completing several certificate training programs. He excelled in defensive tactics, fugitive apprehension, and sharpshooting, to name a few of his accomplishments. Trace’s colleagues knew him most for his leadership abilities, integrity, and ethical standards. He worked his way up to Correctional Captain and retired after dedicating 30 years to his profession. Upon retiring from the Department of Corrections, he moved to Florida to be closer to his daughter (Shonda) and granddaughter (Morgan). He remained in the workforce providing security for Brink’s armored cars and JaxPort Authority and ultimately became a professional driver for Cowan Systems, with whom he was employed at the time of his untimely passing. Trace lived his life to the fullest. He was a free spirit and a man of many talents and interests. He really enjoyed being an active member of social groups. In October 2012 he became a Freemason and was raised to the Sublime Degree of Master Mason on March 30, 2013. Trace also loved sports cars and motorcycles and enjoyed riding his motorcycle as a member of the Ruff &Ready Motorcycle Club. An avid Pittsburgh Steeler Fan, he enjoyed watching football, attending football games and tailgating parties. Some of Trace’s favorite pastimes were: playing chess, bowling, drawing, throwing horseshoes, and learning the Spanish language. In the words of one of his close friends, he was “a passionate, positive and intelligent man.” He was a beautiful soul with a big heart and an even bigger smile who gave generously of his time and attention, leaving his mark on everyone that he met. In addition to his parents, Trace was predeceased by his brother, Jessie Waller, Sr., and his sister, Annette V. Earl; He leaves to cherish his memories, son, Trace M. Waller, Jr. of Newark, Delaware; daughters Dr. Shonda Waller of Green Cove Springs, Florida; Tyra Webster of Newark, Delaware, and Janee Shantelle of Newark, Delaware; grandchildren Morgan Watts, Dez’lynn and Daks Smith; brother, Warren Waller, Jr., (Marvia); sisters, Deaconess Mary Benjamin, Elder Donnie Patrick, Gladys Lockhart, and Sandra Waller; and a host of nieces, nephews, relatives and devoted friends

Trace M. Waller, Sr. was born on January 30, 1963, in Halifax County, Virginia to the late Warren Waller, Sr., and Vernell Word Waller. He departed this life suddenly on January 9, 2022, in Green Cove Springs, Florida, where he resided since... View Obituary & Service Information

The family of Trace Waller Sr created this Life Tributes page to make it easy to share your memories.

Send flowers to the Waller family.