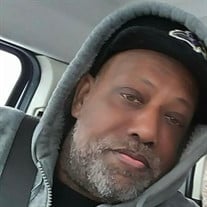 A beloved husband, father, son, brother, uncle and friend Terrence(Terry) Michael Ennis received his wings on Thursday December 17, 2020. Terry was born November 10, 1963 to the late Daniel R. Ennis and Joyce A. Ennis. He was the youngest of three siblings. Terry received his early education in the New Castle County School District and graduated from William Penn High School. Terry was an excellent fisherman and he loved roller-skating( which he had a job as a referee), at Elsmere Roller Rink. As a child Terry always said he wanted to be a Tuck(Truck) driver, so after graduating from high school he enrolled in Truck driving school and he became a Professional driver. Terry was a Professional Long Distance driver for 36 years and received many of safety awards plus a National Million Miles Truckers award (an award to truck drivers who have driven a million miles in his career. In February 14, 2006, Terry travel to the Philippines where he met the love of his life Marissa Arlin and they were married August 15, 2007. In October 2018, Terry and Marissa became members of Prayer, Praise and Power Ministries. Terry was preceded in death by his father Daniel R. Ennis and brother Derek Ennis. Terry leave to cherish his memories his loving wife Marissa, his mother Joyce Ennis-Dyer, special daughter Brittany Murray, one brother Dwayne Ennis(Germania), one sister Giavanna Edwards(Jonathan), three nieces Patrice, Gianna, Briana, one Aunt Doris Rouse, one God son Terrence, and a devoted Best Friend Willie Hardy, and a host of nieces and nephews, and cousins, and most of all Sheba his dog

A beloved husband, father, son, brother, uncle and friend Terrence(Terry) Michael Ennis received his wings on Thursday December 17, 2020. Terry was born November 10, 1963 to the late Daniel R. Ennis and Joyce A. Ennis. He was the youngest... View Obituary & Service Information

The family of Terrence Ennis created this Life Tributes page to make it easy to share your memories.

Send flowers to the Ennis family.