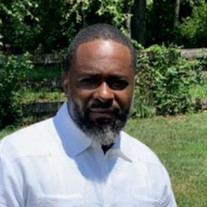 HIS LEGACY Dr. Terrance D. Newton, Sr., affectionately known as "Newt", was born on November 22, 1974, in Wilmington, Delaware. He received his heavenly wings on March 21, 2022, while in the Christiana Care Hospital, surrounded by his family.... View Obituary & Service Information

The family of Dr Terrance D Newton Sr created this Life Tributes page to make it easy to share your memories.

Send flowers to the Newton family.