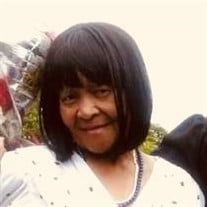 Tansy Lee Boykin-Harrell, the daughter of the late Burlee Boykin and Carrie B Hayes, was born on January 21, 1934 in Red Jacket, West Virginia, quietly and peacefully slipped away on Friday, July 27, 2018 at 4:25 am. Tansy received her early education in the public schools of Williamson, West Virginia. She was raised by her Aunt Anna Hairston and upon the death of Aunt Anna. Tansy's sister Mary, affectionately called the Boss Lady, nurtured and gave her instructions and guidance in being a strong and independent woman. Determined and strong willed was Tansy! After graduating from Liberty High School, Tansy relocated to Wilmington, Delaware to be with her mother, Carrie Hayes and her other siblings. Tansy was a go getter and started working at cleaning houses for Mr. Pete's Cleaning Service. Tansy later began cleaning at Exxon Oil in Wilmington, later named Exxon Oil Refinery. Tansy formed her very own window cleaning service and purchased a blue and white van known as the "Cupsie Wagon". She hired a few ladies to work for her (Mabel, Lucille, Barbara-Jean and Maude) and a few others; and she began cleaning newly built houses for the Magnus Construction and Carl Hauser Builders. In the early 60's, 70's 80's and 90's she cleaned new homes throughout greater Wilmington, Hockessin, Newark and Middletown areas. Tansy's Window Cleaning Service grew and established for 30 years. Tansy was a woman of faith and accepted the Lord as her personal savior at a very young age. She was a member of the Mother Union American Methodist Episcopal Church, under the pastorate of the late Reverend Irene C. Dutton, for many years. Tansy enjoyed the Mother Church and would often travel with them to various trips and outings. Tansy met and married Leroy Robinson in 1957. These two were a perfect and amazing match. Leroy a loving man and a good provider was her "knight in shining armor". They traveled and enjoyed life to the fullest! Tansy also enjoyed spending time with her step children: Brenda, Maxine, Marsha and Leroy, Jr. After 12 years of marriage and Leroy's brief illness on May 14, 1969 he was called from labor to reward. This was a tremendous lost for Tansy and the entire family. Tansy later met Mr. Sheldon B. Harrell and after a brief courtship, they married in 1972. Tansy once again was happy that she had met another good, caring man who also was a good provider. Tansy and Sheldon were inseparable and enjoyed traveling and entertaining family and friends.

Tansy Lee Boykin-Harrell, the daughter of the late Burlee Boykin and Carrie B Hayes, was born on January 21, 1934 in Red Jacket, West Virginia, quietly and peacefully slipped away on Friday, July 27, 2018 at 4:25 am. Tansy received her early... View Obituary & Service Information

The family of Tansy Lee Robinson-Harrell created this Life Tributes page to make it easy to share your memories.

Tansy Lee Boykin-Harrell, the daughter of the late Burlee Boykin...

Send flowers to the Robinson-Harrell family.