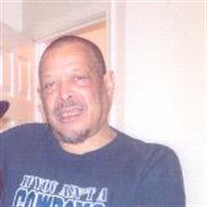 Sylvester Asbury Wise, beloved son of the late Leah Jane Wise and Hardin Taylor, who was raised by his grandparents Sarah and Upshur Wise, was born on April 14, 1945 in Onley, VA. He gained his heavenly wings on Tuesday, June 18, 2019. Sylvester... View Obituary & Service Information

The family of Sylvester A Wise created this Life Tributes page to make it easy to share your memories.

Send flowers to the Wise family.