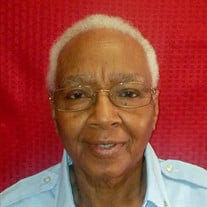 Shirley Ann Stevenson Dixon was born October 13, 1940 in Houston, Delaware and peacefully passed away August 27th, 2021. Shirley was the daughter of the late George Stevenson Sr. and Anna Dixon Karaam but she was raised by her late grandparents Clarence Dixon Sr. and Malinda Dixon and her late aunts Lettie Dixon and Roseanna Dixon Pinder. Shirley attended William Henry High School in Dover, Delaware. After graduating high school in 1958 she moved to Philadelphia PA and went to the Philadelphia School of Nursing to earn her LPN. She worked in the medical field for quite some years before join the Army Reserve in the Mid 70’s. In 1979 Shirley would also earn her Dental Technician certification from the National School of Health Technology in Philadelphia, PA. Thru the 80’s and into the 2000’s Shirley pursued Educational endeavors going to a multitude of colleges and educational programs. Some of the colleges and educational programs she attended were Del tech Community College, Devry University, Omega Real Estate School, the Institute for the Development of Human Resources, and finally Goldey Beacom College where she had received her Associate Degree for Marketing and Management. She also started her own desktop publishing business call Mowbry Design Inc. in 1997. In her later years was a member of the Coast Guard Auxiliary. Shirley was a very loving mother and caring grandmother that loved to be around her grandchildren. She always stressed the importance of a good education to them. Shirley was very humorous and loved to tell jokes. In her past time she love to play puzzles and watch TV shows with her grandchildren. In addition to her parents, grandparents, and aunts that raised her she is preceded in death by her children father George Mills and her siblings George Stevenson Jr., Savannah Stevenson (George Stevenson Jr. Wife), Wilbur Stevenson, and Al Karaam. She leaves behind in her legacy two sons Darryl Stevenson and George El, their wife’s Selette James and Diana Shiwpal El and a total of fourteen grandchildren Darryl Dessau, Patrice Stevenson, Allison Stevenson, Thomas Madison, Deserea Madison, Sarah Hardy, Deshawn Todd-Stevenson, Nadia El, Nalla El, George El, Diana El, Sophia Livingston, Jackie Matics, and Aya Roberson (great granddaughter). Also she leave behind her brothers Tony Smith, Michael Smith, Ali Karaam, James Karaam, John Karaam and sisters Irene Stevenson, Alena Karaam, Yvonne Dudley, Beatrice Smith, Darlene Griffin, and Floreda Smith. And host of nieces, nephews, cousins and friends.

Shirley Ann Stevenson Dixon was born October 13, 1940 in Houston, Delaware and peacefully passed away August 27th, 2021. Shirley was the daughter of the late George Stevenson Sr. and Anna Dixon Karaam but she was raised by her late grandparents... View Obituary & Service Information

The family of Shirley Ann Stevenson Dixon created this Life Tributes page to make it easy to share your memories.