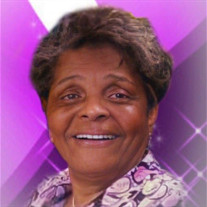 Ms Shirley Lynch, the daughter of the late Lewis Lynch Sr. and Jesse Spruill Lynch, was born in Hollister, North Carolina on October 22, 1944. She departed this life on March 29, 2021 peacefully at Seasons Hospice in Christiana Hospital, Newark, DE. She received her early education in the public schools of Hollister, North Carolina and attended Eastman High School. She later earned her GED after moving to Washington, DC. Shirley had a passion for professional learning and she became a Cosmetologist in 1995 and a Licensed Insurance agent in 1996. Shirley worked in retail for many years in Washington DC at McBride's and S.S. Kresge Department stores prior to relocating to Wilmington, DE in 1976. She then worked for Hearns Supermarket and K-Mart in Castle Mall until her back could no longer take the strain of retail work. Shirley always had passion for learning and in 1980 she returned to school at the Institute of Development of Human Resources in Newark, DE and earned certifications in Accounts Payable, Accounts Receivable, Payroll Systems, Typing and Office Cashier. This led her to work for WSFS, Sears and The National Bank of Detroit where she served as a supervisor until 1991 when they closed their Delaware Operations. Shirley also combined her passion for learning and doing hair and enrolled in Schilling and Douglas Cosmetology school in Newark, DE. Shirley went on to do hair for many years in the Newark area. She mastered the art of the Jeri Curl and had many GM,Chrysler and State of Delaware Employees as clients. Shirley went to work for TCIM Services in 1995 and became a Licensed Insurance Agent in 1996. She eventually retired from the Conference Group in 2006. Shirley had a few hobbies including reading, going to the "Chingy Chingy" as she called it and talking on the phone with her dear cousin Roberta Johnson in San Diego for hours at a time. Shirley was a devoted Mother and she especially Loved being a Grandmother and Great Grandmother.  Her Grand Children called her by many names, Grandma, Mum Mum, Granny and the great grands called her GG.  She was the best GG ever, she always made sure she had snacks for her boys Noah and Xavier.  She even kept treats for her great grand dog Bear.  Shirley was proceeded in death by her parents Lewis Lynch Sr and Jesse Spruill Lynch, sisters Velma Lee and Ruth Johnson, Brothers Kelsey Lynch and James Lynch.  She is survived by her Daughter Audrey Woods (Raymond) of Bear, DE, her Son Dexter Parraway (Lezle) of Newark, DE, Bounus son Lester Witcher Jr. Grandson Derek Williams Jr, Granddaughters Stephanie Parraway, Sabrina Williams, Ciara Parraway and bonus Granddaughter Tiara Hall. Two Great Grandsons Noah Stokes and Xavier Chun. One sister Clara Harris of Bear, DE, One Brother Lewis Lynch Sr (Peggy) of New Castle, DE.  A host of Nieces, Nephews and Cousins and devoted friends.

The family of Shirley Lynch created this Life Tributes page to make it easy to share your memories.

Ms Shirley Lynch, the daughter of the late Lewis Lynch Sr. and...

Send flowers to the Lynch family.