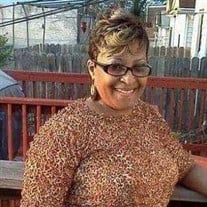 Shirlene Paulette Hutson was born on September 29, 1962 in Wilmington, Delaware to the late Mattie L. and Edward R. Hutson. Sheri was she was affectionately known, departed this life after a long battle with Lupus on May 17, 2019 at the Christiana Care Hospital. Sheri was educated in the Catholic School System and attended St. Hedwig's Catholic School in Wilmington, Delaware from first through eighth grade where she eventually graduated. She was employed with the General Motors Corporation as a lineman. Unfortunately due to health issues with Lupus, Sheri went out on disability and was unable to return to the workforce. She entered into a relationship with Charles Harrison and on December 17, 1980 gave birth to her only child Charron Antonio Hutson. Several years later, Sheri was united in marriage to Tracey Thomas. After a few years the marriage was dissolved, however they remained friends. An avid skater during her younger years, Sheri and her cousin Stephanie enjoyed and always looked forward to going to the Elsmere Skating Rink. She also loved to dress and had a very good taste in clothing. She was known and admired for her exquisite fashion sense. Sheri loved a well kept home and was regarded as an excellent house keeper. Sheri accepted the Lord in her early thirties. Although she had her struggles, she always knew and acknowledged where her help came from and stood on Psalms 121:1-3. She attended F.I.G.H.T For Families Fellowship which she considered her home church. Besides the Word, Sheri loved to hear the Voices of Fellowship minister in song. Sheri leaves to cherish her memory her son, Charron Antonio Hutson (Carmen); brother, Hilton Snead (Gloria) of Savannah, Georgia; sister, Geraldine Johnson of Wilmington, Delaware; six grandchildren, Jarron, Cherron, Shanya, A'Shya, Zahmir Hutson and Christian Patton; three aunts, Alice Watson of Wilmington, Delaware, Lillian Newkirk of Baltimore Maryland, and Bertha Lyell (John) of savannah, Georgia; cousin Stephanie Fox; devoted niece Katrina Johnson, and nephew Eddie Johnson; devoted friend Monique Brown; a host of cousins and friends

Shirlene Paulette Hutson was born on September 29, 1962 in Wilmington, Delaware to the late Mattie L. and Edward R. Hutson. Sheri was she was affectionately known, departed this life after a long battle with Lupus on May 17, 2019 at the Christiana... View Obituary & Service Information

The family of Shirlene Hutson created this Life Tributes page to make it easy to share your memories.

Shirlene Paulette Hutson was born on September 29, 1962 in Wilmington,...

Send flowers to the Hutson family.