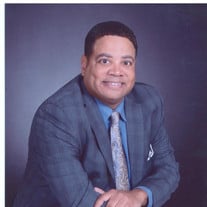 The Journey of Sean M. Alston Those who loved Sean Michael Alston are at a loss for words. Not only because his passing on January 4, 2019 was sudden, but also because he found joy in the world and shared it with the rest of us. His bigger-than-life personality was eclipsed only by the size of his heart for others and he brought love and a touch of magic into the lives of everyone he met. Born to Jean Rutter Alston and William Alston on August 28, 1971, in Wilmington, Delaware, Sean was a proud son, protective older brother, doting uncle, beloved nephew and spirited cousin. His devotion to family was visible daily, whether he was spoiling his niece, sharing advice about a tough situation, or planning the next family vacation or birthday celebration. A wordsmith, “Trekie”, and car enthusiast, Sean was meticulous in everything he did. When he advised you about a car, you bought it. When he researched the best dog breeders and found just the right puppy, you brought him home. When he revised your resume, you got the job. As a child, Sean’s mischievous side gave his parents fits. His humor was always in fun, never mean-spirited and he knew just when to stop to avoid a trip to the principal’s office. After graduating from Thomas McKean High School, Sean received a scholarship to attend Delaware State University, where he continued his love for playing the trumpet and performed with the DSU Marching Band. After earning his bachelor’s degree in marketing and graduating with honors, Sean received a full academic scholarship to the University of Illinois where he earned a master’s of business administration, marketing management degree. Sean’s career in marketing spanned more than two decades, with job opportunities pushing him to tackle new challenges. He spoke proudly of the work he did at each step on his journey, as an Associate Manager of Marketing Services for Beneficial Financial Services, Marketing Operations Manager of Secondary Markets Trading Portfolio Group for JP Morgan and Company, Senior Director of Client Marketing Services for Sykes Enterprises, Associate Vice President of Marketing with SPi Global, and Head of Digital Marketing for Orion. In October 2018, he embarked on a new business endeavor with ADEC Solutions, which he said felt like home and where he brought his beloved Miniature Schnauzer, Wynton Marsalis Alston, to work with him each day. Sean played as hard as he worked, and despite his professional success, remained a kid at heart. As a boy he loved Dungeons and Dragons. As a man he enjoyed reading novels like Game of Thrones, Lord of the Rings and Harry Potter and providing a commentary comparing the books to their screen versions. The model cars he used to build as a child gave way to his collection of luxury SUVs and sports cars as an adult. His love for the Super Friends on Saturday morning cartoons blossomed into a fondness for X-Men and Marvel movies. And Sean would tell you in a hot second that Star Trek and Star Wars are simply timeless. If Sean thought it, he said it. He was blessed with a brilliant mind and sharp wit. Optimistic and insightful, he lifted those around him, giving freely of his time and talents without expecting anything in return. You knew when Sean was in the room. He carried himself with confidence, unwilling to conform and unafraid of being different. Sean was gutsy and open to trying new things. There was no pretense. He felt like an old friend the first time you met him and you knew the connection was genuine through the warmth of his hug. He was definitely serious when it came to food and music. He enjoyed Broadway shows and adored the icons and divas of our era, including Diana Ross, Michael and Janet Jackson, Whitney Houston and Prince. And his impersonations of them were part of his comedic repertoire. Sean was a connoisseur who loved good food and could recommend all the best restaurants. But he was adamant that no one could “burn” like his mom who he considered a Gourmet Chef, and proudly boasted about the menus and banquet spreads of Aunt Netta. Left behind to cherish memories are his parents, William and Jean Alston; sister, Denise Alston; niece, Jade Alston; pet-child, Wynton Marsalis Alston; paternal uncles and aunts: James and Mary Fitzgerald; Carlon-Berko Alston; Gregory Alston; Bernard Alston; Beverley Boulware; Charles and Sharon Jones; maternal uncles and aunts: Martha Parker; William & Lillian Rutter; Deborah Pitts; James and Jennifer Rutter; and Everett Rutter; and a host of cousins and friends.

The Journey of Sean M. Alston Those who loved Sean Michael Alston are at a loss for words. Not only because his passing on January 4, 2019 was sudden, but also because he found joy in the world and shared... View Obituary & Service Information

The family of Sean Alston created this Life Tributes page to make it easy to share your memories.

The Journey of Sean M. Alston

Those who loved Sean Michael Alston...

Send flowers to the Alston family.