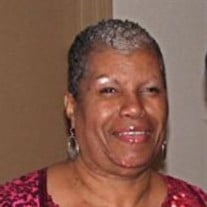 Sara Martinez Rodriguez was born on February 7, 1954 in Philadelphia, the only daughter of the late Billy Weeks and Reverend Edith Hazel Weeks. She departed this life peacefully on August 16, 2021 to enter eternal rest. She grew up in Philadelphia and was educated in the public school system. Sara delayed completing her secondary education while raising her family of six but later she graduated from Benjamin Franklin High School in 1987, an accomplishment she was very proud to achieve. As a non-traditional student, she participated in talent shows, homecoming and prom. Sara stressed the importance of education to her children. In 1989, Sara decided she wanted to learn how to operate and drive a school bus. Her career as a school bus driver spanned 30 plus years. She was employed by several companies over the years Class I bus company, Philly Transportation and Diamond Bus company. Until she formed her own company, SMR Transportation several years ago. If you saw Sara, you saw her yellow school bus. She worked until she was sidelined by the pandemic and her declining health. She accepted Christ at a young age and was a member of Bethel Deliverance International Church. In addition to actively participating in church functions, Sara would offer her services as a driver for church functions or to any organization who expressed a need without hesitation. Sara was blessed with a beautiful singing voice and began singing in church at an early age. Sara sang on several choirs throughout Philadelphia for many years and enjoyed sharing her voice with the world. Whether singing in a choir or solo at a wedding or a memorial service, Sara’s distinct Soft soprano voice would often bring tears to the eyes and the audience to their feet. Sara was an avid DIY (do-it-yourself) queen who never turned down a project, big or small. She enjoyed providing décor services for all types of events, No matter what the budget, Sara had a knack for transforming a space into something absolutely amazing. Throughout the years turning a profit was not the goal. Sara’s focus in life was purely driven by her selflessness, the desires of her heart and the happiness of others. In addition to her parents, she was preceded in death by five older brothers. Richard, Charles, Gilbert, Herman and Leonard Weeks. Left to cherish her memory and continue her legacy are 4 daughters, Parella, Jame, Sara and Lea; sons Joel and Ryan (Vanessa); 26 grandchildren; 10 great-grandchildren; three special sisters Janet Pinkney, Donna Lane and Verdette Bennett, a host of relatives and friends who will miss her dearly. Sorrowfully submitted, The Family "Mothers hold their children’s hands for a while, but their hearts forever.”

Sara Martinez Rodriguez was born on February 7, 1954 in Philadelphia, the only daughter of the late Billy Weeks and Reverend Edith Hazel Weeks. She departed this life peacefully on August 16, 2021 to enter eternal rest. She grew up in Philadelphia... View Obituary & Service Information

The family of Sara Martinez Rodriguez created this Life Tributes page to make it easy to share your memories.

Sara Martinez Rodriguez was born on February 7, 1954 in Philadelphia,...