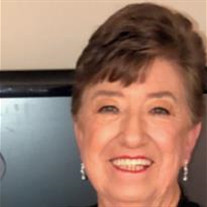 Rose Marie Sage was born on December 24, 1944 to the late James C. Sage and Rose Martin. She peacefully departed this life on August 25, 2020 surrounded by family. Rose spent her early years in Elkton MD where she attended Immaculate Conception and after moving to Delaware, she attended Holy Angels. She graduated from Corpus Christi High School in Elsmere, Delaware. Rose resided in Newark, Delaware until she met the love of her life Robert (Bob) C. Brogdon at Rehoboth Beach; they married and had 3 children from this union Laurie, Tracy and Robert (Robbie). Rose drove a school bus for a few years, and she was a secretary at Cameron Iron Works in Texas. After spending so much time on the road with her husband Bob she decided to get her CDL license and drove an 18-wheeler cross country with Bob for many years. Together they enjoyed sightseeing and hitting every Casino along the way. She later retired her CDL license and worked for U-Store in Tennessee until she moved back to Delaware in 2018 to live with her daughter Tracy. Mom enjoyed getting up and enjoying her cup of coffee and cigarettes. She loved to read and to play her casino games. She loved watching Jeopardy and Wheel of Fortune every night. In addition to her parents Rose was preceded in death by her brother James C. Sage, Jr. and her husband Robert Charles Brogdon who passed away on June 26th, 2017 after over 50 years of marriage. Rose is survived by her three children Laurie (Danny), Tracy (John) and Robbie (Jennifer). Seven grandchildren; Ashley, Brandy, Storm, Lilly, Austin, Tyler and Cody. Seven great grandchildren; Wyatt, Bryce, Elijah, Raelynn, Isabella, Alex and Abrianna (and a new baby great granddaughter on the way). Three sisters Patty Kelly (Ron), Joyce Storm (John), Cathy Creed (Mike) and one brother William Sage (Debbie); and a host of nieces, nephews, cousins and friends.

Rose Marie Sage was born on December 24, 1944 to the late James C. Sage and Rose Martin. She peacefully departed this life on August 25, 2020 surrounded by family. Rose spent her early years in Elkton MD where she attended Immaculate Conception... View Obituary & Service Information

The family of Rose Marie Brogdon created this Life Tributes page to make it easy to share your memories.

Send flowers to the Brogdon family.