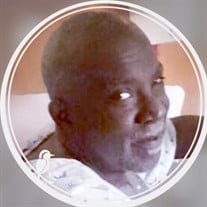 Roman DePaul Hudson was born September 23, 1950 to the late Edgar and Margaret Hudson. He was called home Wednesday, November 22, 2017. Roman was raised in Wilmington, DE and received his education in the Wilmington Public School System. He graduated from Howard High School, which is also where he met his high school sweet heart English Ann Fisher. On August 10, 1985 Roman and English were joined in Holy Matrimony. Roman was a soldier in the US Army where he spent his time as a cook. He continued cooking, once he left the Army, for various Wilmington Employers, retiring from the ARP Company. Roman was a laid back man. Gentle, kind, and mostly quiet unless he was talking smack during football season or playing a friendly game of spades. He could make a mean pan of fried potatoes, and blasting The Commodores was a Saturday morning ritual. Roman did not have any biological sons; however, he was a role model to many of the young boys growing up in the community. He enjoyed the simple things in life, fishing with his brothers and friends, playing cards, listening to music, and he loved his Philadelphia Eagles. His parents, Edgar and Margaret Hudson; his brother, Lamont Stevenson; and his wife English Ann Hudson preceded Roman in death. Roman leaves to cherish his memory his brothers, Larry Hudson (Monica), Dwain Hudson, and Edward Stevenson (Hazel); his sister Laurie Fisher (Matthew); his daughters Nina Parker, Osha Hudson, and Ella Finley (William); his son “in love” Johann Stanford; his grandchildren Akilah Parker, C’Jia Hudson, Genesis Parker, Josiah Parker, Davon Finley and Maya Finley; and a host of aunts and uncles, nieces and nephews, cousins and friends.

Roman DePaul Hudson was born September 23, 1950 to the late Edgar and Margaret Hudson. He was called home Wednesday, November 22, 2017. Roman was raised in Wilmington, DE and received his education in the Wilmington Public School System.... View Obituary & Service Information

The family of Roman DePaul Hudson created this Life Tributes page to make it easy to share your memories.

Send flowers to the Hudson family.