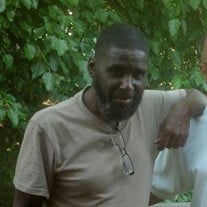 Robert Sylvester Mitchell Jr., was born on August 27, 1953 to the union of Robert Mitchell Sr. and Barbara Mitchell-Pyle of Chester, Pennsylvania. Robert, affectionately known by all as ‘Poppy’ was educated in the Chester-Upland School District. Poppy was a very energetic child, who loved dancing, singing, pranking his siblings and playing drums on the kitchen table. He was a kind and gentle person with an affectionate smile, and warm spirit. Poppy was a stranger to no one, everyone in Chester knew him. Life wasn’t always easy for Poppy. During his early years, the world tried to take him but God was gracious and kind enough to give him back to us. Even though he faced many challenges during his earlier years, Poppy never strayed from his family. During his later years in life, he began to experience health challenges and stayed very close to his family who were dedicated to caring for him. Poppy was a man who never hesitated to express his love to his family and they knew how much he loved them. His family considered him a “Miracle Child”, because he always bounced back from whatever adversity he faced. He loved nothing more than being with his family at birthday parties, graduations, and cookouts. He enjoyed eating steak, crabs, “mustard” pretzels and talking on the phone to his daughter and grandson. A highlight in Poppy’s life was flying to California to visit his sister and extending the trip to Las Vegas. Another highlight was reconnecting with his daughter Arrie and grandson, Dan’te. Poppy was preceded in death by his father Robert S. Mitchell Sr. and his son Donnell McIntyre. He leaves to cherish his loving memory: his daughter, Arrie Edwards (NC), his mother Barbara Mitchell-Pyle (Chester, PA), four sisters: Renee’ Mackey (Los Angeles, CA), Ruth Glascoe and her husband Tony (Chester, PA), Ronette Mitchell (Chester, PA), Rosalind Mitchell (Beauford, GA) and one brother, Ryan Mitchell and his wife Karen (Somerset, NJ), grandson Dan’te Jenkins Jr (NC), granddaughter Neairah McIntyre (PA), and his godmother, Alicia Terry (Claymont, DE) and a host of family and friends. Poppy’s legacy will forever be remembered by all who loved and cherished him. He leaves a lasting imprint on all of our hearts.

Robert Sylvester Mitchell Jr., was born on August 27, 1953 to the union of Robert Mitchell Sr. and Barbara Mitchell-Pyle of Chester, Pennsylvania. Robert, affectionately known by all as &#8216;Poppy&#8217; was educated in the Chester-Upland... View Obituary & Service Information

The family of Roberts S Mitchell Jr created this Life Tributes page to make it easy to share your memories.

Send flowers to the Mitchell family.