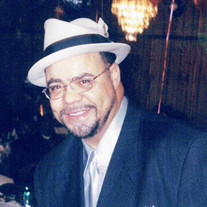 Robert G. Johnson was born on December 22, 1958 to Ruth Johnson and Robert L. Johnson in Hollister, North Carolina. He peacefully transitioned in his home from this life holding his loving daughter’s hand on March 24, 2021. In his early years of life, Robert relocated to Delaware with his mother and family. He received his early education in the public schools of Delaware. Robert grew up in the neighborhood affectionately referred to as “Ghost Town” in west Wilmington. He attended Wilmington High School and immediately enlisted in the United States Army in 1976 where he was later honorably discharged. On December 5, 1981, he married his life-long love and friend Alisa “Sunny” Johnson. Together, they built an amazing life and family. Robert worked at New Castle County Parks and Recreation. He later worked as a school district bus driver and at DART as a city bus driver. Robert (also known to many as Rob, “G”, and Glenn, his middle name) was an amazing man who was highly intelligent and became the subject matter go-to person on almost any topic for many in the family. He showed genuine love to his family and friends and always made everyone feel included. In fact, Rob and Sunny’s house was known for being the common gathering spot. He was the life of the party. Rob was the nickname giver in the family. He would give you a nickname and commit to it from then on. His kindness, warm smile, and laugh often preceded him. Robert (Glenn) enjoyed spending time with his family and friends, cooking, and singing. He was also known for having the latest tech devices. He was an exceptional son, husband, father, pop-pop, brother, uncle, and cousin. He had a way of comforting any crying baby and rocking them fast to sleep. He especially took great joy in this ability in his role as “Pop-Pop Rob”. Robert is loved across generations ranging from his elders to the youngest children in the family. He just had a quality about him that made you feel you had a deep connection with him whether you knew him for a few days or a few decades. His faith was also an increasingly influential part of his life especially during health challenges. He will forever be missed. Robert was preceded in death by the love of his life, his wife, Alisa P. Johnson; mother, Ruth Johnson; father, Robert L. Johnson; and brother, Jesse Johnson. Robert leaves to cherish his memories: his daughter, Tiara Camper; granddaughter, Chriselle Camper; sister, Sarah Mason; brother, Michael Johnson; sister, Joanne Richardson, and a host of other aunts, uncles, nieces, nephews, cousins, family and friends.

Robert G. Johnson was born on December 22, 1958 to Ruth Johnson and Robert L. Johnson in Hollister, North Carolina. He peacefully transitioned in his home from this life holding his loving daughter&#8217;s hand on March 24, 2021. In his early... View Obituary & Service Information

The family of Robert Johnson created this Life Tributes page to make it easy to share your memories.

Send flowers to the Johnson family.