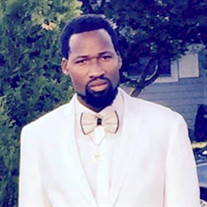 Ricardo also known as "Ricky" or "Floater" by friends and family members was born on the 18th of January, 1984 to mother Charmaine. Born on a rainy Wednesday, he was delivered into this world by his Grandmother and a friend of the family. He brought joy with him to the family, as I watched him grow I witnessed the excellence of a young man, and was inspired by my older brother. He started Kidd's Basic School in September 1987. He was loved by all; family members, teachers, friends and the people of his community. He was jovial, smart, honest, caring and kind; always eager to learn. He then graduated Linstead a primary school where he completed the exam and passed for Elevation High School, I would help him with his assignments and homework. Ricardo would always greet you with a smile, which made your day, well mannered did not speak much but did his work well. His mother filed for him, after a while his papers came through. He was living with his aunt who taught him the role of life, how he should live, he was baptized in Jesus name, then he went abroad to live with his mother. While living with his mother he got his first job, then decided to become a entrepreneur with bike wiring with others. He promoted his business anywhere he went. It was often that he met people who needed help, without hesitation, he would help them going the extra mile always. He would lend counsel always encouraging people to stay in school. Ricardo was a role model to all who knew him. He upheld the law of the country he lived in. He was a family man, who is often assisted his family in every way possible. Ricardo was a steward in our family. He was very ambitious, determined to work hard for his goals and what he believed in. This wonderful man, some would even say was an angel, died on the 30th of August 2019. His name was Ricardo Henry Hylton and he will be truly missed. Lovingly Submitted, The Family

Ricardo also known as "Ricky" or "Floater" by friends and family members was born on the 18th of January, 1984 to mother Charmaine. Born on a rainy Wednesday, he was delivered into this world by his Grandmother and a friend of the family. He... View Obituary & Service Information

The family of Ricardo Henry Hylton created this Life Tributes page to make it easy to share your memories.

Ricardo also known as &quot;Ricky&quot; or &quot;Floater&quot; by friends and family...

Send flowers to the Hylton family.