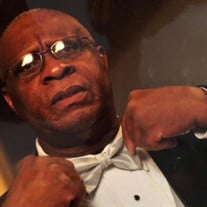 "Mickey's Story Reginald Trader, son of the late Reginald Trader, Sr. and Georgeanne Harmon Porter was born June 13, 1941 in Wilmington, Delaware. He departed this life on Thursday, November 1, 2018. Reginald received his early education in Catholic Schools and the Wilmington Public Schools graduating from Brown Vocational School in 1960. Reginald was known to many as "Mickey". "Mickey" proudly served his country in the US Army for three years as a "Paratrooper" and received an Honorable Discharge. In the early 60's "Mickey" met and married Doris L. Rider and from this union they had three daughters, Sharon, Rhonda and Glyniss. "Mickey" worked for CB Richards and Ellis Co., followed by Lincoln and Harris and finally returning to CB Richard & Ellis Co. During his tenure of 28 years with these two companies, Mickey contracted with several companies including: Colonial National Bank, Advanta National Bank, Fleet Credit Card Service and Bank of America in the maintenance department and was a genuine kind man to whoever he walked beside or passed in the halls. He worked at every building and loved to help out whenever he could. He came home every day and talked about his day with the guys he worked with. He was well known for his jokes, his laughing and dancing. "Mickey" was a member of the Crew Gentlemen's Club - One for All, All for One (Men of the Sixties) and he was a man of principle and character. He enjoyed bowling, going to Delaware Park and spending time with his family. He also enjoyed collecting the football pool. Delaware Park was his second home and his son-in-law Rudy would often say "he loves sitting at the slot machines, poker table and bingo table. "Mickey" was preceded in death by: his brothers Butch Trader, Tommy Harmon and Bruce Harmon. "Mickey" leaves to cherish his memory his faithful companion Cheryl Wells, daughters: Sharon Johnson, Rhonda Trader and Glynnis Trader-Deedon; one son-in-law Rudy Deedon; one Uncle Warren Trader, Sr. (Pat); one aunt Beatrice Taylor (William); five grandchildren, Kena, Brandi, Shana, Freddie and adopted granddaughter Aaiiyah Boateng all of whom he loved so much, 16 great grandchildren along with a host of family and friends. Lovingly Submitted, The Family

The family of Reginald "Mickey" Trader created this Life Tributes page to make it easy to share your memories.

Send flowers to the Trader family.