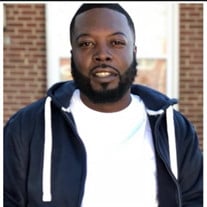 Rasheed Lamar White, son of Trena White and the late Zachery Grayson, was born on February 20th, 1981, in Wilmington, Delaware. Rasheed departed this life at the age of 41, on February 25th, 2022. Rasheed, affectionately known as Fatty or “G.O.A.T”, received his education at William Penn and Concord High School. His talent and love of sports earned him recognition amongst his peers. Articles about Rasheed circulated local newspapers as he became one of the leading scorers for Concord High School. Upon graduating school, he did not leave his love of sports behind. He would attend sporting events all over the country as well as locally in his hometown of Wilmington, DE. He put on for his City, while enjoying a good game in his leisure time. Rasheed stood out wherever he went, with an admirable style; he was always fashionable. It was almost certain wherever you saw him he would have on a dark pair of designer shades and a bright smile that would light up any room. Rasheed was a hardworking man, most recently employed with the City of Wilmington. Rasheed put his all into ensuring his family was cared for and provided for; family meant everything to him. A loving father of four beautiful children. He also took pride in being called Uncle Fatty by his nieces and nephews who loved him dearly, and he loved them just as much. There are so many great things to be said about Rasheed, his loving demeanor meant so much to so many people. It was Rasheed's love for the people that knew him that allowed him to be admired for his calm and cool mannerisms. He attracted so many loyal friends, they loved their “Bro”. Although he stood out amongst a crowd, he remained humble and affectionate. Rasheed is preceded in death by his father Zachary Grayson, his sister Lashay White, his grandmother the late Annie Mae White, Grandfather Wendell Handy, grandmother Bertha L. Longhand and grandfather Bernie Wilkins, uncles Sylvester and Michael White, aunts Cynthia and Carolyn White, great uncles Eugene, Thomas, Benny, Leroy, Rossie and Michael White, and nephew Corey Henry Jr. Rasheed leaves to cherish his precious memories his mother Trena White, Children Reaquan L. White, Rasheed L. White, Quadir Robinson-White, and Saky’hla D. White, and Tristan Heyward (Stepdaughter). Sisters, Tyaisha (Kevin) White, Annette White, Nikisha Jenkins, Tiffany Dickerson, and Dennecia Cater. His brothers Dwayne (Nyeesha) White and Zack Grayson jr. His lifelong companion Jessica, Aunts Sharon White, Gwen and Shelly Ponzo, Uncle Victor White …. and host of nieces, nephews, cousins and friends.

Rasheed Lamar White, son of Trena White and the late Zachery Grayson, was born on February 20th, 1981, in Wilmington, Delaware. Rasheed departed this life at the age of 41, on February 25th, 2022. Rasheed, affectionately known as Fatty or... View Obituary & Service Information

The family of Rasheed White created this Life Tributes page to make it easy to share your memories.

Send flowers to the White family.