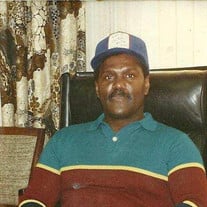 Randall L. Gibson Sr. Son of the late William and Mildred Gibson, he was born in Wilmington, Delaware and he was 75 years old. He departed this life on September 13, 2019. Randall received his early education in Wilmington, Delaware and graduated from Howard High School in 1963. He played football, baseball and after he graduated, he played for the All-Stars-Blue Team at University Delaware in 1963 under Number 40. He was a tight end, defense and offense player on the football team, and he was called "Radar" because once he sees who has the ball, he was coming to get you. In addition, he held a position as a left fielder when he played baseball in high school. On February 27, 1965, he was united in Holy Matrimony to Nora E. Hamilton and from this union there were five children. Randall was a faithful member of Mt. Joy United Methodist Church; were he sang on the Men’s and Mass Choir. Also, he was on the Board of Trustee. Subsequently, he went to his son Church at Ekklesia Fellowship Church were Randall L. Gibson Jr. was a Deacon. Lastly, the pastor of that church Aaron Harris merged from Ekklesia Fellowship Church to Chippey Chapel Church. Randall Sr. was employed at General Motors with many positions and retired in July 1991 after being employed for 31 years. He was also was a member of the UAW 435. Later, he was employed at Sears Outlet for 10 years and then officially retired. Randall Sr. enjoyed playing in the bowling tournament with his son and watching the Philadelphia Eagles Football team play. In addition, he enjoyed dancing, telling jokes to make people laugh and travelling. Moreover, he enjoyed going crabbing with his late brother Billy. Randall leaves to Cherish his memory: wife, Nora E. Gibson, Children: Nora E. Gibson, Deborah M. Gibson, Dara Gibson-Smith, Shani D. Gibson-Diallo, Randall L. Gibson Jr.; Grandchildren: Douglas W. Wright Jr., Kawon N. Miller (Sarah), Jamal A. Smith, Dion W. Matthews, Tyara D. McDuffie, John M. Barnhart IV and great-grand children: Kannon M. Miller; Sister: Rosa M. Malloy, Sister-in-laws: Laura Brezial, Louise Douglass, Ruth Pulliam (William), Ruby Smith; Brother-in-laws: Armando Staats, William Pulliam and Wendell Saunders (Ellie); and a host of neices, nephews, cousins and friends. Randall was preceded in death by his mother Mildred Clarissa Gibson, father William Reed Gibson; brother William Gibson and sisters, Maria E. Church, FLorence S.L. Staats and Beatrice E. Tolbert.

The family of Randall L Gibson created this Life Tributes page to make it easy to share your memories.

Send flowers to the Gibson family.