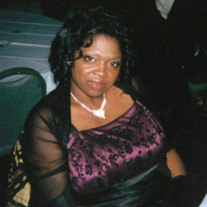 Patricia Ann Perkins departed this life suddenly on Thursday, August 9, 2018. She was affectionately known to her family and friends as Pasty, Trice, Ms. T. and Patty-Pooh. Patricia Ann Perkins was born on Saturday, April 8, 1961 to the late Frank Perkins and Pearl Perkins in Wilmington, Delaware. Patricia completed her public school education in the Red Clay School District. She furthered her education by earning a degree in Graphic Design at Delaware State University in Dover, Delaware. In her early years, she was very active in outdoor sports and activities. She occasionally hit a home run in baseball for the Kingwoods Community Center team. With her brother William she earned awards for mastering the art of karate. At the age of 8 she served as a cashier in Woody’s store and often left customers amazed by her quick math ability. In later years, she enjoyed serving in her role as a florist. Patricia committed 24 years of service to the Delaware Division of Social Services in New Castle, Delaware. She was extremely helpful to those in need and serviced the people with such love, laughter, compassion and understanding. She attended Bethel A. M. E. Church in Wilmington, Delaware where her mother, Pearl Chambers also attends. She was also a member of the Order of the Eastern Star. Patricia was well known for her famous “Patty Cakes” and she prided herself on making her famous pound cake. She ventured into creating more delicious treats such as cheesecakes and brownies, just to name a few. Patricia was known for many things to many people but above all she was loving, social, helpful, caring and always smiling. She was always a phone call away to assist others in need and spared no expense through her generosity. She was one to build bridges between people and used her kind words to connect and uplift others. Patricia is survived by her mother, Pearl Chambers; two loving sons, Desean Perkins and Corey Mitchell; one grandson Jahmi Perkins; her brothers, Frank Perkins (Linda), Glenn Perkins (Linda), Greg Perkins (Monica), William Perkins (Marchelle), Derell Woods, Sonny Woods (Celestine), Alvin Woods (Tammy) and her sister Mary Williams. She has a host of aunts and uncles, nieces and nephews and her devoted friends of many years, Pat Miller, Pat Brown, Drew Lawry, Francine Wright, Renee Glenn and so many more.

Patricia Ann Perkins departed this life suddenly on Thursday, August 9, 2018. She was affectionately known to her family and friends as Pasty, Trice, Ms. T. and Patty-Pooh. Patricia Ann Perkins was born on Saturday, April 8, 1961 to the... View Obituary & Service Information

The family of Patricia Ann Perkins created this Life Tributes page to make it easy to share your memories.

Send flowers to the Perkins family.