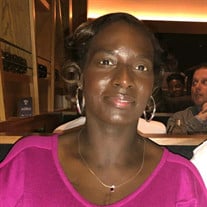 Patricia Yvonne Horton was born on July 11, 1968 in Norfolk, Virginia to the late George and Patsy Mark. She was the third of four children born into their loving family. Patricia was called home to her eternal rest on July 1, 2021. The family moved to Penllyn, Pennsylvania when Tricia, as she fondly was called was about three years old. Over the years, her schooling took place in the Wissahickon, Souderton and North Penn School Districts. She graduated from North Penn High School in 1987. She attended the Lansdale School of Business and received a certificate in Office Administration. Later she studied Biology at Delaware Valley College in Doylestown. On March 10, 1995, Tricia was joined in marriage to Robert L. Horton in El Paso, Texas. Theirs was a blended family with a son Robert, Jr. and they welcomed the birth of a daughter, Samantha Brielle. The Horton family relocated to New Jersey and later to Pennsylvania. Tricia was employed as a Loan Officer with the Commercial Credit Loan Company. Later Tricia joined Merck and Company, where she was a Biotechnician for 22 years. As a dedicated wife and mother, Tricia applied those same traits when she became a faithful member of Montco Bible Fellowship in Lansdale, PA. While at Montco, she became a member of the Montco Choir and a Ministry Leader for the Nursery Ministry, that lovingly cared for toddlers during Sunday service, engaging them with games and other activities while their parents attended service. A woman with many interest, Tricia was especially diligent in reading the Bible. Her favorite verse was Psalm 34:1 I will bless the LORD at all times; His praise shall continually be in my mouth. Tricia gave her life to Christ in August 1999, and was baptized July 24th, 2005. She also enjoyed bowling, crocheting, gardening, entertaining family and friends in her home and traveling. Tricia traveled with a Missions group from Montco Bible Fellowship to Guyana. She also enjoyed visiting Australia with her husband and daughter to attend their son's wedding. She also took several cruises with her family. Patricia was preceded in death by her parents, her brother Edward I. Mark and her sister, Antonia D. Mark. She leaves to mourn her passing her husband Robert; son Robert, Jr., daughter-in-law Leslie Ann; daughter, Samantha and finance' Antwaun Booker; sister Angela Mark; grandchildren, Brielle and Robert Horton III; sister-in-law Kim Mark, brother in law Leo Horton; uncles and aunts Rudy and Barbara Livingstone; Donald and Marion Teasley; and Fred and Janet Teasley; uncles Charles Teasley, Calvin Teasley, James Mark and Harold Mark; and a niece and nephew Sattera and a Bradley Mark; sister and brother in love Beth Moore and Melville Jones and a host of family and friends. Psalm 30:5 Weeping may endure for a night, But joy comes in the morning

Patricia Yvonne Horton was born on July 11, 1968 in Norfolk, Virginia to the late George and Patsy Mark. She was the third of four children born into their loving family. Patricia was called home to her eternal rest on July 1, 2021. The family... View Obituary & Service Information

The family of Patricia Yvonne Horton created this Life Tributes page to make it easy to share your memories.

Send flowers to the Horton family.