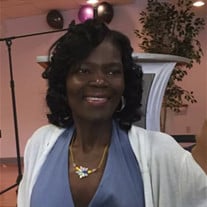 MOZELLA DINEEN MARSHALL was born on December 20, 1964 in Wilmington, Delaware. She was the youngest of seven children born to John Jackson and Mildred Eloise Marshall. Mozella attended Wilmington public schools, and graduated from Howard Career Center in 1982 with her core studies in dental assistance. She later married Djibril Barry in 2004. “Dineen” or “Moke,” as she was affectionately called by her family and close friends, was known for her cooking, and heading up a gathering of some sort. She could often be found in someone’s kitchen starting a feast of anything she could find to cook. She loved watching cooking shows, and trying new recipes. After many years of practice, she finally mastered her mother’s lemon cake. Dineen loved shopping, and occasionally could be found in a mall or a thrift shop. It didn’t matter to her where she found it; a pretty outfit, was a pretty outfit! Mozella was employed for over twenty years at First USA Bank. She later graduated from Dawn Institute with a certification in Nursing Assistance. She worked many years at Arbors Nursing Home before her health began to fail. Even in her sickness, she could be found somewhere doing temp work and volunteering in different schools and centers. Her love for the Lord led her to Canaan Baptist Church, under the leadership of Pastor Christopher Bullock. She loved the 8 a.m. service. There she enjoyed helping others and being known as the silent missionary. Whether it was taking care of children, giving people a place to stay, feeding the hungry, or buying them clothes, it was a gift she inherited from her parents. Growing up in the Marshall household, you never knew who you would find on their couch when you got up in the morning. Mozella’s adoration for her family was known by the way she spoke to you. Her sarcasm and dry humor was her way of saying, “I really like you.” And could usually be taken the wrong way by many. Her family knew her bark was worse than her bite. Mozella was predeceased by her parents, Mildred and John Marshall; and two sisters, Jacqueline Marshall and Joyce Marshall-Bryant. Mozella leaves to celebrate her legacy: her children, Hawa and Djibril Barry; sister, Michelle M. Marshall; three brothers, Reginald T., Delmas R., and Michael D. Marshall; two God sisters, Vanessa Harvey and Oneita Marshall; three devoted nieces, Zina K. Burke, Daria K. Gore and Cierra J. Coleman; seven nephews, seven great-nieces, five great-nephews, two great great-nieces, one great great-nephew; one aunt, Eloise Marshall, and a host of cousins, other relatives, and friends.

The family of Mozella D Marshall created this Life Tributes page to make it easy to share your memories.

MOZELLA DINEEN MARSHALL was born on December 20, 1964 in Wilmington,...

Send flowers to the Marshall family.