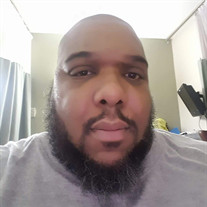 Michael Everett Pinder Glasgow, affectionately known as "Big Mike", was born July 7, 1978 to Francis Barbara Glasgow and John Pinder in Chester, PA. Michael Gained his entry into glory on August 16, 2018. Mike graduated from Chester High School in 1996. After graduating he joined the work force with his Uncle Tony in the Transportation Industry. Mike enjoyed his time away traveling on the road working and creating memories with not only his uncle but he also got to share those moments with Uncle Tony's son Lamont. As if working long hours and traveling together wasn't enough...they were also neighbors!! Lamont recalls a special memory about his "homie", they would play video games on the porch and Mike would try to be a stuntman and end up getting fussed out by his father. Mike's greatest accomplishment was becoming a father. His love for his children would show in everything he would do. Anything Big Mike set out to do, he did it all with passion. Mike loved everyone he came in contact with. You could not leave his presence without receiving one of his warm bear hugs! And while in his presence, he'd be sure to mention how much he loved his kids, wrestling, his football team Philadelphia Eagles and his favorite niece Ikeia. Mike leaves to cherish his memories; his mother Francis Barbara Glasgow, sisters: Vivienne (Neecy) Glasgow, Barbara (Sooky) Calm, Brenda Richardson and Cheryl Richardson, and Gloria Pinder. Brothers; James Richardson, Sam Edwards and Jay Jay Pinder. Six children; Michael Jr., Lania, MeOnnie, Qwmere, Ikeia and Anastasia Glasgow. Special friends; Doniesha Johnson, Onessa Newton, Kye and Rayleen Pierce. God children Netta Palmer and Wale Michael Glover, his 5th street crew "4Deep" and a host of cousins, nieces, nephews and friends. Michael is predeceased by his father John Pinder Maternal grandparents; Vivian Cunningham and General Jacob, Paternal grandparents John Pinder Sr., and Nellie Pinder, Special Aunt: Celeste Leake and Special Uncle: Harold Edwards Lovingly submitted The Family

The family of Michael Everett Pinder-Glasgow created this Life Tributes page to make it easy to share your memories.

Send flowers to the Pinder-Glasgow family.