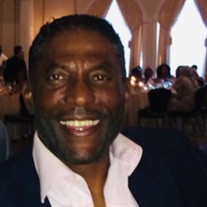 Michael Moore was born on October 30, 1950 to Margaret Moore and Horace Wallace. On Sunday April 28, 2019 Michael was called home to be with our Lord and Savior Jesus Christ. Michael received his primary education in the Philadelphia Public School System and excelled in basketball. He was a rising high school basketball star known throughout the city of Philadelphia for his basketball handling skills. Shortly after graduating from high school Michael enrolled in the United States Army where he proudly served his country. Michael retired from the United States Army as an honorable decorated veteran with an Overseas Service Ribbon, and Army Service Ribbon, an Expert Badge M16 Rifle, and an Army Achievement Medal. As an honorable veteran Michael continued his studies in business, information technology, and culinary. Michael worked for the city of Philadelphia where he retired after 20 years of service. Michael was also a great chef, he spent several years serving the south Philadelphia community as a chef at the Original Bookbinder’s Restaurant in Old City, Philadelphia. Affectionately known as “Michal” Michael was an icon in the city of Philadelphia. Michael spent a lot of time in the community, particularly in South Philadelphia. Michael loved the people of Philadelphia and they loved him back. Michael always said, “I am a G and I protect the streets of Philadelphia”, and the streets of Philadelphia protected Michael too. Michael loved his role as President in the Moore-Cornelius annual family celebration and reunion. He loved his family and loved brining his family together. Remaining to cherish his life and continue his legacy are: his wife Priscilla Moore; his daughters Enjoi, Debbie; his grandchildren Nat’e (Sean), Heaven, Jacob, Jaylin; his great-grandchildren Chase and Coi, his brothers Steven, Kenney, Umar, Darren; his sisters Valerie, Judith, Robin; and his beloved aunt Marian Townsend, and a host of cousins, nieces, nephews, and friends. Michael was preceded in death by his mother Margaret Moore, his father Horace Wallace, and his brother Keith (Salahudin) Moore.

Michael Moore was born on October 30, 1950 to Margaret Moore and Horace Wallace. On Sunday April 28, 2019 Michael was called home to be with our Lord and Savior Jesus Christ. Michael received his primary education in the Philadelphia Public... View Obituary & Service Information

The family of Michael Moore created this Life Tributes page to make it easy to share your memories.

Send flowers to the Moore family.