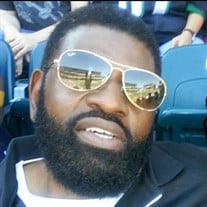 Michael A. Jarman was born in Wilmington, DE on October 12, 1957, to Aleese Jarman and Royce Blackshear. He received his early education in the Wilmington Public School system. He then attended Howard High School where he excelled in football and basketball. While attending Howard he learned the trade of barbering which he enjoyed very much. Later in life, Michael gained employment at General Motors where he worked on the assembly line but instead of working, he chose to read the newspaper and became quite the jokester with close friends and colleagues. Big “Jarm” which he was so affectionally called was known to be always clean cut with his signature silk scarf wrapped around his neck, tam hat, and let’s not forget his dark “stunner shades” which he never left home without. He was known for dropping jewels to anyone in the community young or old with his captivating smile that you could see from a mile away. In 1979, he became a father to beautiful baby girl named “Kami”. Michael adored her so much, as well as she adored him. Looking at her you see him, same smile, laugh and loving personality. Michael was her right to her wrong, as well as her balance. Michael was a great father and always kept his presence alive in Kami’s life. On February 26, 2003, Michael became a grandfather to “Lil Mark” who he loved so much. His grandson reminded him of himself growing up playing basketball and hanging out with friends while being a ladies’ man…LOL. Above all things Michael always emphasized the importance of getting an education and traveling the world. On September 20, 2021, our lives changed forever, and the Lord called him home. Although we question why, God is and will always be in control. Michael is proceeded in death by his maternal grandparents Dorothy and Fred Jarman, his paternal grandparents Frank and Isabella Blackshear, and niece Leenise Blackshear. Michael is survived by his mother Aleese Blackshear, father Royce Blackshear (Maggie), daughter Kami Lucas (Mark), ex-wife Kathy Jarman, grandson Mark Sharper III, three brothers Royce Blackshear Jr (Chu), Tony Blackshear (Francine) and David Watson, two sisters Denise Blackshear and Latanya Smalls and one stepsister Loretta Brown (Howard). His two closest cousins Sharron and Sherel Broomer. Monique Brown (girlfriend) who was very close to his heart and a host of nieces, nephews, extended family, and many, many friends.

Michael A. Jarman was born in Wilmington, DE on October 12, 1957, to Aleese Jarman and Royce Blackshear. He received his early education in the Wilmington Public School system. He then attended Howard High School where he excelled in football... View Obituary & Service Information

The family of Michael A Jarman created this Life Tributes page to make it easy to share your memories.

Send flowers to the Jarman family.