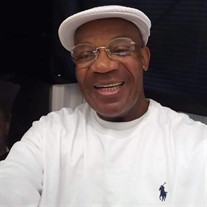 Marvin Lee Sudler, son of the late Benjamin J. and Mary Francis Sudler, was born March 28, 1957 in Wilmington, Delaware. Marvin departed this glorious life on Friday December 17, 2021 in Wilmington Hospital. Marvin received his early education in the public schools of Wilmington Delaware. During that time Marvin met his high school sweetheart Joyce Waters in 1972 and from that love affair, six beautiful children were born. Marvin and Joyce were joined together in Holy Matrimony in 1983. Marvin enjoyed cleaning and held various cleaning jobs until becoming employed at the Port of Wilmington where he remained for many years until becoming disabled in 2015. Marvin was a God fearing man who found his love for the Lord in 2010 and accepted the Lord as his personal savior. Anyone who knew him, knew that he loved the Lord and God was first in everything he did. He loved to give God all of the Glory, Honor and Praise. Besides his love for his gospel music Marvin enjoyed singing, cooking, cleaning, walking, exercising, washing clothes and he loved to eat. Marvin was very outspoken and funny. He had a special love for dogs and thought he was the dog whisperer. Marvin was a avid chess player who thought he could be everybody in chess. He also enjoyed playing spades with his family and co-workers at the port. Marvin was a sharp dresser and was clean as the board of health. Marvin enjoyed spending time with his kids, grandkids, great grands, family and friends Marvin was preceded in death by his parents Benjamin J. and Mary Francis Sudler; siblings Victor Floyd, Wayne Daniels, Cynthia, Stephanie, Benjamin and Dennis Sudler; wife Joyce Sudler and his dogs Smokey, Nala, Chase and Nee Mee. Marvin leaves to cherish his memory eight (8) children, Marvin, Nyree, Aissia, Jamare, Ernest and Joyce Waters, Robert Hawkes and Lareese Dorsey; 4 brothers Reginald and Matthew Sudler Andre Bodiford and Taquan Stewart; 1 sister Dawn Matthews; 5 sister in laws Barbara and Nancy Sudler, Doris Carter, Betty and Deborah Waters and 1 brother in law Wayne Waters; 2 devoted friends Gene Johnson and Abdallah Muhammad Bey; 21 grandchildren; 8 great grandchildren and a host of devoted family and friends; 3 dogs Colby, Dizney and Bugatti Lovingly Submitted the family

The family of Marvin Sudler created this Life Tributes page to make it easy to share your memories.

Send flowers to the Sudler family.