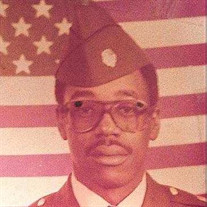 Marquin "Mark" Eugene Stallings was born in Chester, Pennsylvania on June 22, 1956 to the late Valma White Stallings and Farrell McKay Stallings. He received his early religious training at Bethany Baptist Church where he was baptized under the leadership of Reverend Daniel Scott. Mark as he was affectionately called, was educated in the Chester Upland School District, graduating from Chester High School in 1974. After high school, Mark enlisted in the United States Army and served 17 years. He was stationed all over Europe and was deployed to the Persian Gulf as well. He was a proud and honorable veteran of "Desert Strom", also known as The Gulf War. After his service in the military, Mark worked various jobs. His employment included Charlie's Car Service and the Coatesville Veterans Hospital. Mark loved art and music. We loved his drawings. He was a gifted sketch artist and painter, played drums and trombone and was a member of the Chester High School marching band under the direction of Miss Claire Fitzpatrick pack in their "hey day". He also loved to play chess and was an avid Philadelphia Eagles football fan. Throughout a long illness, his family stood by him. He was lovingly cared for at home by a personal team of professional nurses - his own sisters and his niece, Nikki. On Saturday, September 21, 2019, the angels whispered "Sweet Peace" to our beloved Mark and his soul entered into eternal rest. He was predeceased by his brother, Ronald Stallings. Mark was married to Sarah Fanning Stallings and from this union, a son was born. He leaves to cherish his memory, his son Marquin E. Stallings, Jr., his daughters Sherrelle Stallings and Chardae Stallings, his sisters Farela Stallings Howie and Nijirii Stallings Harden (Obie), a dear friend Sheila Washington, and a host of aunts, uncles, nieces, nephews, cousins and friends.

Marquin "Mark" Eugene Stallings was born in Chester, Pennsylvania on June 22, 1956 to the late Valma White Stallings and Farrell McKay Stallings. He received his early religious training at Bethany Baptist Church where he was baptized under... View Obituary & Service Information

The family of Marquin Eugene Stallings created this Life Tributes page to make it easy to share your memories.

Send flowers to the Stallings family.