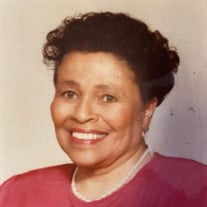 Marion Madeline Clifton was born December 7, 1930, to the late Joseph and Alice Matthews in Wilmington, Delaware. Marion was preceded in death by her two sons, Avon Matthews and Peyton Spencer. Marion was preceded in death by her ten siblings, Alice Matthews, Grace Matthews, Elsie A. Moore, Gladys Horsley, Sarah Briggs (Albert), William Matthews, Charles Matthews, Roland Matthews, Joe Matthews and Albert Brodie. Marion departed this life and transitioned to be present with the Lord on November 20, 2021 at 9:55 pm at Parkview Nursing home in Wilmington, Delaware. Marion received her early education in the public schools of Wilmington. She attended Absalom Jones and Howard High School. She received an Associate in Arts Degree in 1973, and 1977, she received a Bachelor of Arts Degree, from Wilmington College. Marion lived in Riverside, North Broom Street and Rodney Street where she enjoyed the company of her family and friends. Marion last lived in Dunleith a suburb of Wilmington, where she lived for over 30 years. She enjoyed reading books, cooking, play card games with her grandchildren. She gained the most joy from sitting in her chair spending time with her children, grandchildren and great-grandchildren. Marion worked for Community Action Agency of Delaware and Old Atlantic Thrift. She later retired from the State of Delaware. She met and married the late Barnard L. Spencer and from that union they had several children. In 1980, she met and married the late, Archie Stiger. In 1992, she met married the late Robert J. Clifton. Marion was a gracious women, well respected and loved by all who knew her. She was a faithful member of Union Baptist Church where she sang on the choir. She later joined Joshua Harvest and was a mother of the church. Later in life she joined Canaan Baptist Church. She is survived by six children, Eugene Matthews (Anabelle), Brian Matthews, Martin Spencer (Julia “Ball”), Bernadette “Bernie” Spencer, Craig Spencer and Marion “Fee-Fee” Spencer; and a grandson Tyrone Spencer who she cared for as her own. Twenty-eight (28) grandchildren, countless great-grandchildren and great-great-grandchildren along with a host of nieces and nephews. Lovingly Submitted by the Family

The family of Marion M Clifton created this Life Tributes page to make it easy to share your memories.

Send flowers to the Clifton family.