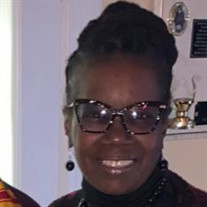 Deaconess Margaret Moore Veney was affectionately known by the nickname of “Push” which was bestowed upon her by her late Mother, Ruby Moore Mosley. Margaret was born on November 9th, 1957 in Chester, PA and departed this life peacefully on January 13th, 2021. Margaret was the second child and first daughter of Ruby Mosley and William Jenkins Sr. Her Stepfather was J.T. Mosley. Margaret was educated in the Chester Upland School District and was an Alumni of the Chester High School Class of 1975. Margaret continued her education and college studies at Goldey-Beacom College where she graduated in 1977, specializing in Education. Margaret was employed throughout her professional career with institutions such as Thomas Edison Charter School, Drew-Pyle in Christiana School District, Marion T. Academy, Elwyn and Dupont; where she was able to use her love for education and teaching children. Margaret “LOVED” fashion, shopping trips, and traveling and often incorporated all three loves into one experience! Those experiences were often in concert with her “hang out buddy” and best friend, her sister Cynthia Holmes. Margaret had the gift of interior decorating and often incorporated an oriental theme in her décor. More than anything…… Margaret loved her children and grandchildren! She was very active in her church, Shiloh Baptist in Delaware, until her illness. Margaret was preceded in death by her mother Ruby Moore Mosley and her step-father J.T. Mosley Margaret leaves to cherish her life and memory, two sons: Kenneth A. Neal Jr. (Tiffany) and Warren L. Veney Jr. as well as her beloved grandchildren, Londyn R. Neal, and Kendin A. Neal. Her surviving siblings include: Cynthia Holmes (Leon, deceased), Derrick Mosley Sr. (Deneen), Darrall Mosley Sr. (Danita), Larry Jenkins, William Jenkins Jr., Helen Jenkins, Robert Jenkins, and Tracey Jenkins (Patricia). Siblings preceded in death include Richard Moore, Pamela Moore-McClary, and Lamont Jenkins. Margaret is survived by a host of Aunts, Uncles, Nieces, Nephews, Cousins and Friends. The Family would like to extend their thanks to Christina Hospital and Fresenius Kidney Care Center for the care extended towards their loved one during her illness and final days. Remember Margaret “Push” Moore Veney as a loving and dedicated Mother & Grandmother, Faithful Deaconess & Servant, Supportive Sister and Family Member and Committed Educator.

Deaconess Margaret Moore Veney was affectionately known by the nickname of &#8220;Push&#8221; which was bestowed upon her by her late Mother, Ruby Moore Mosley. Margaret was born on November 9th, 1957 in Chester, PA and departed this life peacefully... View Obituary & Service Information

The family of Margaret Push Veney created this Life Tributes page to make it easy to share your memories.

Deaconess Margaret Moore Veney was affectionately known by the...

Send flowers to the Veney family.