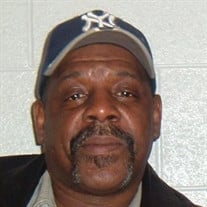 Lester Lacey was born June 19, 1952 in Darby Township, PA. He was the fourth of six children born to the Late John Lacey, Sr. and Leola Lacey. Lester was called to Rest on Saturday, December 28, 2019 at Crozer Chester Medical Center in Upland, PA. As a child, Lester attended Temple Baptist Church in Chester, PA with his family. Lester was educated in the Chester Upland School District. He was a member of the 1971 graduating class Chester High School. Shortly after graduating high school, Lester enlisted in the United States Navy. He obtained an Honorable Discharge in 1977. Lester often identified himself as “John Lacey’s Son”. He was very proud of whom his Father was. Lester was an upbeat, fun and loving guy who loved everybody and made everybody feel special. He was well known for having numerous witty catch phrases, jokes, rhymes and riddles that made him unique and made everyone laugh. Most of his family and friends, he gave nick names to (you know who you are!) Lester was an authentic, genuine person, had a giving spirit and he never looked for anything in return. He was the father of one daughter, Leslie Nichole (affectionately known as Nikki). She was the Apple of His Eye. He was a very loving and nurturing father who laid the foundation of love, trust, protection and security for his daughter. They shared a very special father/daughter relationship. Lester was an avid music lover. He loved R&B, Pop, Rap and Gospel. Lester was the #1 Fan of the Late Boxing Great Muhammad Ali. Anyone and everyone who knew him knows this to be a FACT, especially his grandsons. He not only believed in and respected Ali’s boxing ability, but most importantly he resonated with Ali’s strong character, his undeniable confidence to believe in himself and his strong and unshakable values to stand for what he believed in, regardless of what was stacked against him. He loved Ali’s famous confidence quote “I am the Greatest”. Lester began employment at Crozer Chester Medical Center as a Dietary Aide. Later, he began work in the Steel Industry as a Sand Blaster for several local companies which included Baldt Anchor, Inc., Container Research and M&M Industries. As the work conditions of this industry began to take its toll on Lester’s health, he was forced to change his field of occupation to one that was less taxing. Lester then gained employment at Riddle Village Retirement Community in Media, PA as a Porter. After eleven and a half years of service, he retired in November 2019. Lester really enjoyed working there and was loved by his co-workers. He was known as the Uncle of Riddle Village. Most of the staff referred to him as “Uncle Lester or “Uncle Lacey”. Lester was predeceased by his parents John Sr. and Leola Lacey. He leaves to cherish his memory: one daughter, Leslie Nichole Lacey-Thomas (Ebon Jerrod); three grandsons: Ebon Jr., Eyan and Ehren; a devoted special companion/life partner: Sheila Blagman; two brothers: John Lacey Jr. and Anthony Lacey Sr.; two sisters: Lorraine Harris and Tina Graves; one special aunt: Mae Wimberly; one special uncle: James Lacey; one special niece: Anitra Blake; two special great-nieces: Felicia Lacey and Lamirah Blake; two best friends; Clinton “Hardtimes” Porter and Darryl “Six” Hunter; and a host of other family members: aunt, uncles, nieces, nephews, cousins and friends.

Lester Lacey was born June 19, 1952 in Darby Township, PA. He was the fourth of six children born to the Late John Lacey, Sr. and Leola Lacey. Lester was called to Rest on Saturday, December 28, 2019 at Crozer Chester Medical Center in Upland,... View Obituary & Service Information

The family of Lester Lacey created this Life Tributes page to make it easy to share your memories.

Send flowers to the Lacey family.