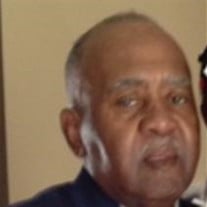 Leon “Sonny” Holmes Leon “Sonny” Holmes was born on February 18, 1947 in Wilmington, Delaware, he was the oldest of five children born to the late Roosevelt and Alma Watson Holmes. He slipped into eternal rest on Saturday, April 4, 2020 at the age of 73. Leon received his education in the Wilmington Public School System, graduating from Howard High School in 1964. He was a member of the Howard High School baseball team where he demonstrated great skills as a pitcher thus allowing him to receive a full scholarship from Delaware State College now known as Delaware State University. A member of the Class of 1969, he earned a Bachelor of Science degree in Business Administration. Leon was drafted on February 5, 1970 into the Army Reserves. He served in Vietnam from December 13, 1970 - October 14, 1971. He was awarded the National Defense Service Medal, the Vietnam Service Medal with 60 device and the Vietnam Campaign Medal with 2 Stars. Leon was employed by the Wilmington Trust Company, the Delaware State Hospital, the Dupont Company and the Dade Behring Company where he retired in 2004. Leon married Cynthia Moore July 7, 2004. They enjoyed traveling often, going on cruises, taking bus trips and making many new friends during their travels until his health began to fail. They were devoted members of Bethany Baptist Church in Chester, Pennsylvania. Leon was an avid sports fan. As a youngster, he played Little League baseball for the Kingswood Community Center. He loved the Philadelphia Phillies. A loyal fan, he often traveled out of state to watch his favorite team play. He also had a passion for horse racing and frequently attended the races. Leon was full of fun laughter and joy. He was giving and loved to share. He often found pleasure in looking after his family. Leon will truly be missed. He was predeceased by his parents, Roosevelt and Alma Holmes and his brother, Alphonso Holmes. Leon leaves to cherish his memory a devoted wife, Cynthia M. Holmes; two daughters, Dawn Little and Ashley Holmes; a stepson, LaShawn Moore; one granddaughter, Amiah Holmes; a sister, Karen Johnson, three brothers, Bobby Cooley, Robert Holmes and Lawrence Holmes (Rev. Theressa); four sisters-in law, six brothers in-law, one father in-law; a devoted cousin, Preston Pruden and a host of nieces, nephews, cousins and friends. He will also be remembered fondly by his devoted caregivers, Cynthia Watson and Juanita Simpkins.

The family of Leon "Sonny" Holmes created this Life Tributes page to make it easy to share your memories.

Send flowers to the Holmes family.