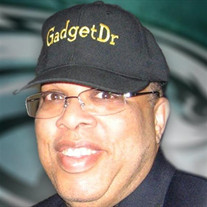 After a courageous battle, Larry Mansfield succumb to complications caused by Cardiac Amyloidosis, a rare, incurable, hereditary disease. He passed on February 16th 2022 at the age of 72. Larry was born October 9th 1949 on a farm in King and Queen County Virginia to Gladys Mansfield and Calvin Butler. He was the oldest of 3 children born to Gladys and Calvin (sister Florence and Brother Dennis). On the farm Larry lived with his great grandparents who were children of slaves. Larry moved to Philadelphia at the age of 5 to be raised by his grandmother and uncles Carl and Bernard Mansfield. He continued to spend the summers back on the farm in Virginia for many years. Larry had fond memories of his time on the farm and often shared stories about hard work, funny adventures, and delicious wholesome food. Larry was raised in the church. In Virginia he attended Third Union Baptist Church and was a member of Mt Carmel Baptist Church in Philadelphia where he sang on the junior choir. He attended William L Sayre Junior High School in Philadelphia and was a member of the school choir. Larry graduated from Overbrook High in 1968. He received a diploma from the Institute Of Computer Sciences Of Philadelphia and a Master Certificate in Project Management from George Washington University. Larry worked briefly as a Draftsman before discovering his passion in computers and technology. He worked as a Computer Programmer. Analyst, and Project Manager. He was employed at Catalytic, CertainTeed Corporation, and retired from IBM. Larry was an intelligent perfectionist who was outstanding at his profession. He had many talents. He was creative, he could sing, he could draw, and he was a great teacher. Larry’s passions included technology, music, basketball, photography and travel. He was also a big Eagles and Sixers fan. His desire to travel and explore took him to over 20 countries. He loved Science Fiction shows and would often quote several of his favorite lines like “You’ve failed me for the last time”, “I find your lack of faith disturbing”, “I’ll be back”, or “This is the way”. He will always be remembered for his generous, compassionate spirit as well as his entertaining sense of humor. Larry is survived by his devoted, loving wife Ilene, sister Florence, and newly discovered siblings (children of Calvin Butler) Cecelia, Lodia, Henry, Calvin and Tasha, numerous cousins, nieces and nephews, as well as many, many friends who loved him. We will all miss the gift of his kind heart and the unique impression he made on everyone who knew him.

After a courageous battle, Larry Mansfield succumb to complications caused by Cardiac Amyloidosis, a rare, incurable, hereditary disease. He passed on February 16th 2022 at the age of 72. Larry was born October 9th 1949 on a farm in King and... View Obituary & Service Information

The family of Larry "Gadget Dr" Mansfield created this Life Tributes page to make it easy to share your memories.

After a courageous battle, Larry Mansfield succumb to complications...

Send flowers to the Mansfield family.