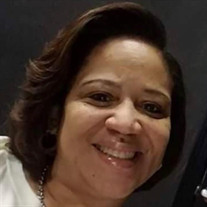 Kywannia Lynn Lopez age 46 was born in Chester, Pennsylvania to LaTanya Lopez and the late Charles Hanson. In her early years she was raised in Princess Anne, Maryland and later spent most of her adult life in Wilmington, Delaware. Kywannia departed this life on December 23, 2018 in the comfort of her home surrounded by her loving family. She enjoyed cooking, music, attending concerts, spending time with her family, volunteering, and she was an avid traveler. Kywannia received her early education through the Colonial school district and later graduated from William Penn High School with honors. As a senior in high school Kywannia was also a debutant through the Omega Chapter of Alpha Kappa Alpha Sorority, Incorporated program which hosted an annual ball, “The Debutant Ball” which was held for senior high school young ladies which helped encourage, strengthen and recognize educational, cultural and social development through workshops, community involvement and the Arts. After high school Kywannia furthered her education and attended the University of Delaware. Kywannia was also a successful business woman. She started her career in banking and worked as a Business Manager for over 12 years at the Chase Bank in Wilmington, Delaware where she oversaw and managed several departments within the organization. Most recently she was employed with Citi Group, after serving many years working for the City of Wilmington as an Assistant to the Commissioner in the Department of Licensing and Inspection. In 2016 Kywannia was honored and presented with the “Start up in a Day Key Contributor Business” Award from the City of Wilmington. As much pride that she took in her professional career, Kywannia devoted a lot of her time to community service with multiple organizations such as the Girls Scouts of America where she was a outreach program coordinator and an event coordinator. Additionally Kywannia helped with many events hosted by the “Miss Hispanic of Delaware” organization as well as the ‘Young Black Achievers’ organization and ‘The Special Olympics of Delaware”. Kywannia is survived by her daughters: Jordan Lopez- Ervin and Danielle Lopez- Padgett. Her siblings: Eugenia Lopez, Gregory Lopez, Toyia Lopez, and Ashia Lopez; and a host of nieces, nephews, and Godchildren. She was preceded in death by her sister LaTanya Lopez. Special thanks to the Helen Graham Cancer Center & Research along with Seasons Hospice of Newark Delaware.

Kywannia Lynn Lopez age 46 was born in Chester, Pennsylvania to LaTanya Lopez and the late Charles Hanson. In her early years she was raised in Princess Anne, Maryland and later spent most of her adult life in Wilmington, Delaware. Kywannia... View Obituary & Service Information

The family of Kywannia Lopez created this Life Tributes page to make it easy to share your memories.

Send flowers to the Lopez family.