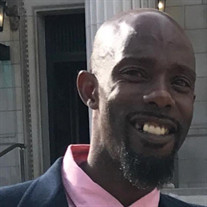 Kevin Lamar West, 42, of Manchester, CT, passed away on September 27th, 2021 in Hartford, CT. He was a devoted, husband and father. He brightened everyone's day with his contagious smile and was always full of jokes. He loved traveling! His favorite place to travel was Montreal. He was an avid reader who loved the works of James Baldwin, W.E. Dubois and Richard Wright just to name a few. Although Kevin loved to joke around, he had a brilliant mind; he was opened minded and he loved to share his knowledge of black culture, racial injustice, politics, healthy living and he kept abreast of current events. He was an advocate for those in marginalized communities (food insecurity, housing, government sponsored assistance programs). He also loved music, sports and spending time with family and friends. He was grateful for every milestone that the Lord allowed him to see, such as the birth of his son, granddaughter, his son graduating from high school and was present when his son started college. Kevin changed his diet to become vegan about 10 years ago and loved to create new vegan dishes for the family. He would read a recipe or eat a dish at a restaurant and duplicate it. He loved to draw. His favorite characters were Charlie Brown and Snoopy. Every year he would watch the special “A Charlie Brown Christmas” with the family. Kevin was born in Wilmington, Delaware on October 28, 1978 to Denise West and Winston Truitt. He married Barbara West on September 8, 2017 in Manchester, CT. He grew up in the Washington, DC – Maryland area where he attended school. He graduated from Northwestern High School in Adelphi, MD and attended George Washington University. He worked as a Manager for Nouria Energy-Golden Nozzle for over two years. He was promoted to Manager after three months of joining Nouria Energy due to his high work ethics. He always exceeded the financial goals set by the company and was rewarded for his efforts. Kevin had a big heart and loved helping others, he spent several years volunteering his time at Friends of the Homeless, a men’s shelter serving food; at Van Sickle Middle School tutoring youth in Math and as a Library Assistant. Kevin also worked as a Hospice Care Volunteer at Care Alternatives in Massachusetts. Kevin loved animals and was known to rescue stray or abused pets. He had a rescue dog “Sam” whom he loved so much! Kevin was preceded in death by his twin sons Andre and Alexander West; his father, Winston Truitt; maternal grandparents, Jerome and Catherine West; and paternal grandmother, Helen M. Truitt. He leaves a legacy of love to his wife Barbara West; mother, Denise West; son, Kevin Lamar West Jr. (mother, Natalie Ojunga-Andrew); daughter in love, Nia Murvin (mother, Natalie Ojunga-Andrew); brothers, Pastor Keenan West (Jeneen) and Winston Pipkin; sister, Dana Brown; granddaughter, Draya Euphoria Simmons; nieces, Taylor Chambers, Destiny Brown, Kaia West and Kelsi West; nephews, Kohen West and Desmond Pipkin; a host of in-laws, aunts, uncles, cousins and friends. The family of Kevin Lamar West extend our sincere thanks to everyone who has reached out to us in love, prayers, sent cards, flowers and condolences during this difficult time. For those of you who shared stories and pictures of Kevin, we thank you. Please continue to keep the family in prayer.

Kevin Lamar West, 42, of Manchester, CT, passed away on September 27th, 2021 in Hartford, CT. He was a devoted, husband and father. He brightened everyone's day with his contagious smile and was always full of jokes. He loved traveling! His... View Obituary & Service Information

The family of Kevin L West created this Life Tributes page to make it easy to share your memories.

Kevin Lamar West, 42, of Manchester, CT, passed away on September...

Send flowers to the West family.