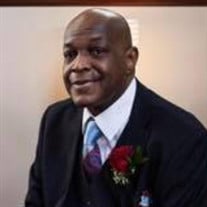 Juan Nehemiah Kelson, son of the late Alberta Olivia Hutson and Nehemiah A. Kelson, entered into this life on July 24, 1954 in Wilmington, Delaware. He was received into glory on April 29. 2019. Educated in the Wilmington Public Schools. Juan attended Wilmington High School, where he played both football and basketball. Juan was employed for 27 years with Esco Engineering Systems. This position allowed him to utilize his creative and natural talents. It was not unusual to find Juan dismantling or reconstructing things. On June 22, 1991, Juan was united in marriage to Roberta Denise Howell. That union made Juan the proud stepfather of four children. After 16 years, that marriage was dissolved, however the close family ties remained. An avid sports fan throughout his lifetime, Juan loved NFL and collegiate football and basketball and would never hesitate to express his views on the topic. He had a great appreciation for music, particularly jazz. His other interests were fishing, playing Frisbee and watching Jeopardy. His culinary skills were appreciated by many. Cooking was a passion for Juan. It was commonplace in his home for people to drop by just to see what he had cooked. In 2004, Juan moved to Pittsburgh, Pennsylvania where he resided with his sister Paula until 2007. Juan flourished there. He accepted Jesus Christ into his life, was baptized and became a member of the Second Baptist Church of Carnegie. There he used his wonderful vocal talent to sing in the Mass Choir and Men's Ensemble. He also acquired his GED while in Pittsburgh. Juan, was man of strong character, determination and presence with a gentle and giving spirit. He would help anyone. He was an encourager and deposited good into many lives. He will truly be missed. He was preceded in death by a brother, Gerald. Juan leaves to cherish his memories, brother, Turhan E. Hutson (Wanda) of Wilmington, Delaware; sisters Paula S. Hutson of Carnegie, Pennsylvania and Linda Kelson Johnson of Bear, Delaware; Robert I. Wood of Baltimore, Maryland; ex-wife, Roberta of Wilmington, Delaware; stepchildren, Brian (D'Jeanne) of Atlanta, Georgia, Larry, Brandan (Amanda) and Tracy of Wilmington, Delaware; a devoted niece, Chaunta Kelson of Bear, Delaware; an aunt Amelia Hutson of Philadelphia, Pennsylvania. He also leaves to cherish his memorable moments, 22 grandchildren, 2 great-grandchildren and a host of relatives and friends.

Juan Nehemiah Kelson, son of the late Alberta Olivia Hutson and Nehemiah A. Kelson, entered into this life on July 24, 1954 in Wilmington, Delaware. He was received into glory on April 29. 2019. Educated in the Wilmington Public Schools.... View Obituary & Service Information

The family of Juan Kelson created this Life Tributes page to make it easy to share your memories.

Send flowers to the Kelson family.