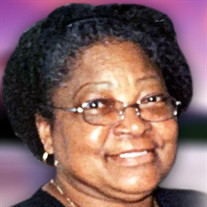 Joycia V. Hughes was born July 8, 1939 in Summerton, SC and entered into eternal rest on January 6, 2020. She was the daughter of the late Charles "CP" Ragin and Rutha Mae Georgia Ragin. She was educated in Philadelphia Public Schools and attended Overbrook High School. Joycia was brought up in a Christian home. When the family relocated to Philadelphia, PA, she attended 46th Street Baptist Church and was later baptized at Cornerstone Baptist Church. Joycia was formerly married to Billy Bost. Later, on May 25, 1985, she united in marriage to Kenneth D. Hughes. Together they became hard working members of Mt. Zion AME Church. Joycia served as a Steward Board Pro Tem, a missionary, and a dedicated choir member. Joycia frequently delivered the message for children's church. One of Joycia's proudest moments was when she became the first African American female journeyman at the Franford Arsenal. Working for the federal government allowed her opportunities to travel across the country. She pursued and obtained her Bachelor of Arts degree in Liberal Studies from Neumann College in 1998 at the age of 59. This accomplishment was a testament that Joycia could do anything that she put her mind to. She was later employed by the Department of Children, Youth and Family Services as a caseworker. Her clients were the recipients of the strenuous efforts she made to help them in any way possible. Family meant everything to Joycia. She was the loving mother of Lamont and Jameal Bost and Kenneth "KK" Hughes. Together, Joycia and Kenneth opened their hearts and their home to Danielle, Nicky and Aun. As a family, they enjoyed traveling, fishing, and watching sports on television. Traveling with Kenny was a favorite past time. She traveled to all, but four states in the United States. Her Favorite song, "Don't Fence ME In", expressed the sentiments that she tried to live. Oh give me land, lots of land, and the starry skies above, Don't fence me in, Let me ride through the wide open country that I love Don't fence me in.-Cole Porter. Joycia was a friendly and giving person who touched the hearts of everyone she met. Her warm smile would greet them and friendly conversation would follow. She was known for having a remedy for any ailment and any situation. Joycia loved to cook. She would make pound cakes, fruit cakes, and sweet potatoes for all who asked, but would never share her recipes. She would laugh and smile, but never share... " it's a family secret!" As a devoted mother, grandmother, sister, aunt, and friend, naturally, our hearts are filled with sorrow, and the tears will flow from all of her loved ones which includes: her sons, Lamont Bost, Jameal Bost, and Kenneth "KK" Hughes, all of Philadelphia, PA; sisters, Judy (Curtis) Lewis of Coatesville, PA.; Rev. Dr. M. Charmaine (Winslow) Ragin Merrick of Summerton, SC; Sheila (Charlie) Ragin Choice and Marcia D. Ragin of Sumter, SC; brothers, Kevin A. Creighton of San Diego, CA; and John A. Ragin of Crestview, FL,; sister-in-law, Joni (Earl) Asbury of Philadelphia, PA,; six grandchildren, Shakina (Lamar) Smith- Woodland and Ashley Joycia Smith of Philadelphia, PA.; Branden J. Smith of Dallas, TX.; Wajaahat Ferguson, Maleeyah, and Ameen, all of Philadelphia, PA.; five great grandchildren, Michael, Malik, Khalee Ashton, and Cayden, all of Philadelphia, PA.; along with a host of nieces, nephews, relatives and friends. LOVINGLY SUBMITTED, The Family

Joycia V. Hughes was born July 8, 1939 in Summerton, SC and entered into eternal rest on January 6, 2020. She was the daughter of the late Charles "CP" Ragin and Rutha Mae Georgia Ragin. She was educated in Philadelphia Public Schools and attended... View Obituary & Service Information

The family of Joycia V Hughes created this Life Tributes page to make it easy to share your memories.

Send flowers to the Hughes family.