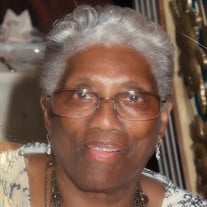 Joyce Agatha Ennis-Dyer, daughter of the late Emory Calloway and Phyllis Frame, was born on April 15, 1933. Joyce departed this life on February 3, 2022, at Wilmington Hospital. Joyce received her early education in the Bethlehem School System and graduated from Liberty High School. After graduating, she married Daniel (Bobby) Ennis, and from that union Derek, Dwayne, Giavanna and Terrence were born. Joyce worked at the Delaware State Hospital as a nurse’s aide. She then worked at the mushroom plant in Avondale, PA. In 1974, she joined the Chrysler Corporation family where she retired in March 1994. To take up some free time, she then worked at Walmart as a greeter. In June 1990, Joyce married John Walter Dyer. Joyce was an avid reader. She loved reading Harlequin Romance Novels. Sometimes, she would finish a book in one day. She also made sure she was there on opening day of 50 Shades of Grey with her fur coat in tow. She played a very active role in her granddaughters’ lives. That would range from taking them to school, dinners, or even teaching them how to fight. Our mother/grandmother Joyce was one of the strongest, most courageous, bravest, kindest, sympathetic women to ever walk this earth. Our family was blessed to have her as the head of the family. She always loved young adults, and if anyone ever needed a place to stay, she would open her doors willingly. She was preceded in death by her late husband John (Walter) Dyer, her sons Derek and Terrence, two sisters Beryl and Janice, and her brother George Frame. She leaves to cherish her memory, her son Dwayne, devoted daughter Giavanna (Jonathan). One sister, Doris Rouse. Granddaughters Gianna Ennis, Brittany Murray, Briana Edwards, and Patrice Ennis. Ten great grandchildren, one daughter in law, Marissa Ennis; two goddaughters (Marquita Dansy Williams and Dorothy Bond), one godson Calvin Harper, a devoted cousin, Cynthia Goodwin, and a host of great nieces, nephews, and cousins. A special thank you to Dr. David Krasner and Dr. Patel for taking such excellent care of her while she was with us.

The family of Joyce Ennis-Dyer created this Life Tributes page to make it easy to share your memories.

Send flowers to the Ennis-Dyer family.