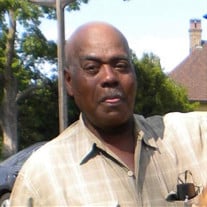 Remembering the Life of Jerry T. Massenburg Jerry Thomas Massenburg, was born on May 15, 1950 to the late James and Naomi Massenburg, in Philadelphia, PA. He was predeceased by his parents, and his brother, Craig. After the loss of his mother Aunt Flossie was considered to be his second mom. On April 15, 2019, almighty God, in his infinite wisdom, mercy and grace, gently closed Jerry’s eyes and drew him home. At an early age, Jerry accepted Christ as his personal Savior at Union Baptist Church in Eastville, VA and always kept the spirit of the Lord in his heart throughout his life. He was educated in the Philadelphia school system and graduated from West Philadelphia High School in 1968. He later went on to attend the Pennsylvania Institute of Technology and CHUBB Institute to study Computer Science. One of his mottos was, “Education is paramount.” Jerry was employed at the Franklin Mint and held several titles there for over 30 years with his last title being an International Network Analyst. Additional places of employment include Comcast and Dart, then retired shortly afterwards. Jerry met Linda at the Franklin Mint and a few years later started courting. She was previously married and had a young child Walter Gregory Smith whom he grew to love and raise. Jerry and Linda were later united in holy matrimony in 1985. From this union was born one daughter, Lynnicia Naomi Massenburg. He was a proud and doting father to his two children, Gregory and Lynnicia. Jerry loved to tinker with gadgets and developed his skills in computer troubleshooting. He was also a handyman and frequently worked on wood craft projects and enjoyed expanding his knowledge to others. In his spare time, he could be found playing with his musical instruments including his electric and acoustic guitars as well as his keyboard. In his early adult years, he would frequently join with friends to play together in a band and occasionally would meet famous musicians. In the spring and summer, he routinely maintained his vegetable, herb and flower gardens. He was an avid fisherman who fished on the Eastern shore, and ultimately became the proud owner of a Captain’s licence. He loved to cook indoors and outdoors, and would share his gourmet meals with family. He would later be known as the “Wizard of Wynthorpe” in his neighborhood for being the go-to guy for home improvement tips. He also maintained records of the Family Tree. He has been a strong-willed and outspoken person that touched many hearts and will be missed dearly by family and friends. Jerry leaves to cherish his memory: his wife of 34 years, Linda; two brothers, James Lawrence (Debra) and Omar (Betty); two children, Walter (Rhonda) and Lynnicia; four grandchildren Walter Jr. “Whodi”, Orionna, Taliyah, and Jadon; two loving aunts Flossie and Dorothy; five brother in-laws, Billy, Frank (Cris), Randy (Adrienne), Richard (Stephanie), and Eric (Nicki); six sister in-laws, Cathy, Beverly, Joeanne (Zeke), Nia (Alan), Roain (Norman), and Cassandra; and many other cousins, nieces, nephews, and friends.

Remembering the Life of Jerry T. Massenburg Jerry Thomas Massenburg, was born on May 15, 1950 to the late James and Naomi Massenburg, in Philadelphia, PA. He was predeceased by his parents, and his brother, Craig.... View Obituary & Service Information

The family of Jerry T Massenburg created this Life Tributes page to make it easy to share your memories.

Send flowers to the Massenburg family.