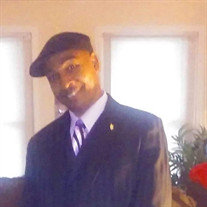 Jeffrey "Jeff" Tyrone Cassidy, Jr. was given by God on June 7, 1968 in Wilmington, Delaware to the late Jeffrey Cassidy Sr and Walzetta Jean Cassidy. He was returned to his heavenly father on Friday, October 2, 2020. Jeff received his education in the Brandywine School District. He received his diploma from James H. Grove Adult High School. Upon graduating, Jeff held various jobs. His last place of employment was with Burris Refrigerated Logistics. Jeff was a member of Mount Harvest Greater Ministries International Church where he rededicated his lift to Christ. Despite Jeff's health challenges, a bright smile always adorned his face. He displayed great strength each day because of his trust in the Lord. Jeff was a firm believer that "I can do all things through Christ who gives me strength." - Philippians 4:13 Jeff spend most of his time growing up on 28th Street at his grand mom Lillie's house, surrounded by family and friends. Jeff was the person that many of his younger family members looked up to. He was affectionately called Leroy, Booker Butt and Uncle Hammer. You would often see Jeff hanging out with his Uncle Coley; his cousins, Damen and Marlin and best friend Rick; all of whom he considered as brothers. He also spent much of his time with the love of his love, LaVette "Vettie" Brown. Jeff adored his three children, Tanesha, Rashon and Keisha. Jeff loved to be surrounded by family and friends while reminiscing about old times. Jeff was an avid football fan, but the Dallas Cowboys had a special place in his heart. Jeff loved to wear his Cowboys starter jacket and jersey. Jeff was preceded in death by his parents, Jeffrey Cassidy, Sr. and Walzetta Jean Cassidy; maternal grandmother Lillie Harris; paternal grandmother Annie Cassidy; Aunt Loretta Gumby (Paul) and Uncle Paul Dennison. Jeff leaves to cherish his memory his loving children, Tanesha Moore, Rashon Brown and Keisha Bloodsworth; his siblings, Kimberly Cassidy (Mark) and LeDay Womack (Yulanda); 9 grandchildren; grandfather Chester Lee Harris; aunts Sheriece Beechum and Veronica Dennison; and Uncle Coley Harris (Patricia); nieces, LeAntaye and Myia; nephews, Tramele and LeDay "Lil Cast"; 2 great nieces and a host of family and friends.

Jeffrey "Jeff" Tyrone Cassidy, Jr. was given by God on June 7, 1968 in Wilmington, Delaware to the late Jeffrey Cassidy Sr and Walzetta Jean Cassidy. He was returned to his heavenly father on Friday, October 2, 2020. Jeff received his education... View Obituary & Service Information

The family of Jeffrey T Cassidy created this Life Tributes page to make it easy to share your memories.

Jeffrey &quot;Jeff&quot; Tyrone Cassidy, Jr. was given by God on June 7,...

Send flowers to the Cassidy family.