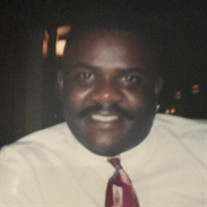 Extraordinary, compassionate, courageous, determined, dependable, outspoken, faith-filled strengthen are words that describe JAY LAMONT MILLER. On October 29, 2020, at Penn University Hospital in Philadelphia, PA; Jay rejoined his beloved parents Richard Miller and Mildred Pritchett-Miller; brother Gary Miller as he transitioned to his eternal reward. Jay Lamont Miller was born the middle child in Wilmington, Delaware on August 9, 1960 to Richard Miller and Mildred Pritchett Miller. He inherited a rich legacy of faith, family, character, leadership and determination. He was a man of extraordinary strength and drive. Jay attended the primary and elementary schools of the Colonial School District, graduating from DeLaWarr High School in 1978. Upon graduation from high school, Jay joined the United States Air Force where he served for ten (10) years. While enlisted in the Air Force, Jay received many awards and certificates, namely, the Air Force Commendation Medal, Good Conduct Medal, Overseas Long Tour Ribbon, Longevity Service Award Ribbon and the Air Force Training Ribbon. Following his discharge from the Air Force, Jay was employed at Mr. GoodBuys, United States Postal Service, Barclays Bank-Beneficial Bank-Household Bank. Jay was absolutely a joy to be around and he was a “social butterfly” because it seemed that everybody knew Jay because he never met a stranger. When you shook Jay’s hand, you knew what you would say next; he had the softest hands. Jay loved to joke around, and he had a laugh that was contagious as his laugh would make you laugh and if you can recall his smile, you know it would light up the room. He could swim like a fish, and could make the perfect snowballs; not to mention that he could whistle without using his hands. His many pastimes included making musical CD’s that people would seek him out to purchase them, bowling, he loved watching Jeopardy, onsite comedian and travelling as Jay traveled all over the world. One of Jay’s greatest accomplishments was being Madison (Maddy) Miller father. She was his pride and joy and it was imperative for him stay in Delaware to oversee her education. Jay’s life of faith, courage and commitment was a resonant sermon to the age of the purpose and power available to all of us if we work together in forgiveness. His example of reaching out to others in love and reconciliation taught us that love is indestructible and only increases from being shared. He leaves this legacy of love and reconciliation to his daughter, Madison L. Miller (mother Arnetta), brother, Richard Miller, sister, Cynthia Miller, Denise Poindexter (Gregory), Linda Brooks-Bates (Keith), aunts, Helen Charlton, Harriett Thompkins, nephews, Devon Berry, Tyrone Miller and Anthony Powell; special friend, Verna Tolson, a host of many cousins and friends.

The family of Jay L Miller created this Life Tributes page to make it easy to share your memories.

Send flowers to the Miller family.