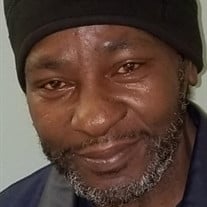 James Allen Hamilton was born July 24, 1963 in Wilmington, Delaware, the son of both Henry and Betty Rivers. He was born again in 1995 when he received Christ into his life at New Destiny Fellowship church in Wilmington, Delaware. James transitioned from this life on Saturday August 3rd, 2019. James attended and successfully graduated with honors from Christiana High School located in Newark, Delaware. He pursued a career and worked as a construction worker in his later years. James most enjoyed and was an avid basketball player. His sense of humor was like no other, often cracking jokes with his family and friends. James liked playing cards and visiting the casinos when he had some free time. To know James was to love him, he never knew a stranger, always charming and kind to all that came in contact with him, especially with the ladies. James's presence would illuminate any room that he entered with his distinctive walk and smile. James personality was very strong-willed and outspoken, however, his heart was so huge as he showed this through being a huge giver. James loved spending time with his grandchildren, they would always light up and run to him, whom they dearly referred to as “Pop-Pop”. He enjoyed showing up and surprising them with a trip to the store buying them a mounds of snacks and sweets. James will be remembered intimately by his children who he loved very much. His daughters remember him as the coolest Old Head On The Block’. He shared so many experiences with his children, as one of his daughter’s reflect on when they were all out at an All-You-Can-Eat crab restaurant, she attempted to reserve some crabs to take home and eat later, but became nervous when Dad jokingly stated that he would tell the workers on her if she did. James leaves to cherish his memory: his loving children CaMeana Cephas-Williams, Jamel Benson, TaSheena Smith, Shantia Aikens, Betty Harris and Jasalyn Benson; his grandchildren Jamai Benson, Javion Hammond, Crishan Ellerbe, Karon Lee, Xylon Aikens, Jamel Hammond, Justyce Jackson, MarLyn Kelson, Salon Williams, Jeremiah Smith Jr., Xylah Williams, Martin Williams Jr., Jayce Smith and Journee Jackson; his siblings Tracy Hamilton, Anthony Hamilton, Henry Rivers II and Maggie Rivers; devoted niece and nephew Diamonet Hamilton and Kenneth Hamilton; Devoted Aunts Pamela Ford, Anna Walker and Delores Hamilton; Uncle Kevin Hamilton: two devoted sons Aaron and Vaughn Cephas; devoted companion Carol Stanley; two son in-laws Jeremiah Smith Sr. And Martin Williams Sr.; cousins, Robin Walker, Stephanie Ford, Sinphone Ford, Denise Deputy; longtime friend Sheila Taylor; two best friends Gary (Hawk) and Arnold (Barney) Dickerson; James was preceded in death by his son Jamel Benson, mother Betty Rivers and sister Tracy Hamilton. Loving Submitting The Family

The family of James Allen Hamilton created this Life Tributes page to make it easy to share your memories.

Send flowers to the Hamilton family.