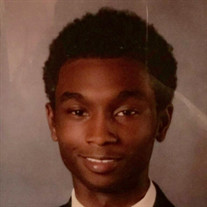 Jameir Marvin Vann Robinson was born August 27, 1997 to Jacqueia Robinson-Simmons and Marvin Vann, Jr. in Philadelphia, Pennsylvania. Jameir resided in Delaware with his grandparents, Prunetta and Earl, but he also enjoyed trips to Philly, spending time with Mom Mom Jackie and Poppy Vincent. Jameir's life was tragically cut short on Sunday, May 13, 2018. Jameir grew up between two loving households in both Philadelphia and Delaware. He graduated from West Philadelphia High School in June, 2016 marking the beginning of adulthood. He was an avid sports fan and played many sports as a youth. He played football, high school basketball and he did Karate; he was also a water baby, loving to swim at an early age. He enjoyed hanging out with his friends, sampling music and producing music. He loved time spent with his family, especially his little sisters. Jameir was always pleasant, kind and always ready to assist if needed or not. He had respect for everyone and was always greeting you with a smile. He was a hard worker and enjoyed working with children. He held a few jobs while he was a teen, included being a camp counselor, a mentor and definitely a jokester! His kids at the Thinking Out of the Box Learning Center (TOOTBLC) were his priority while in his care. Mr. Jameir, Mr. Jameir was all you heard at times. He was also a big brother to those children who were only kids themselves. His time was well spent in helping these children. He touched so many lives at TOOTBLC! Always keeping in touch with his Aunt Quia and Uncle Phil for whom he worked. Later JAMEIR started working at the Delaware State Hospital for the Chronically Ill down in Smyrna, Delaware. Growing into his manhood and buying himself a new car. Jameir loved to hand out with his Uncle Jordan, cousins Josh and Adii, and his friends, always laughing and joking on the front steps of his grandparent's home. Jameir at one time was a resident of Wilton Street, making him one of theirs. Jameir spend quality time with both his parents and step-parents alike. His joy was his little sisters whom he absolutely adored. They always made him smile! Jameir had a quiet soul and a warm spirit. Jameir was preceded in death by: his grandmother, Evelyn Robinson, Dorothy Johnson-Norfleet and an uncle John Norfleet. Jameir leaves to mourn his passing; his parents, Jacqueia Robinson-Simmons (Reuben) and Marvin Vann, Jr., (Naomi); his great-grandfather, John Norfellt (aka Fred); his grandparent, Jacqueline and Vincent Johnson (Philadelphia) and Prunetta and Earl Brown (Delaware); his siblings include: Maya and Madison Simmons (Philadelphia) and Mikayla Vann (Philadelphia) Elijah and Carmello Vann (New Jersey); a host of aunts and uncles, cousins, step-brothers and sisters; his god-mother Joyce Talia Jordan; other relatives and close friends

The family of Jameir M Vann-Robinson created this Life Tributes page to make it easy to share your memories.

Send flowers to the Vann-Robinson family.