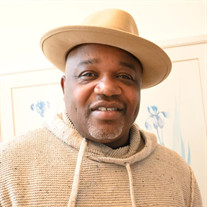 REMBERING ISAAC Isaac J. Fleming Sr., affectionately known as “Man” was born July 29, 1967 in Accomack, Virginia to Hattie Brown and Isaac Handy and raised by Hattie & Leroy Salters Brown in Wilmington, Delaware. He transitioned to his heavenly home on January 25, 2021. Isaac received his early education in the Wilmington, Delaware school system and graduated in 1986 from Concord High School. After graduation he enlisted in the Navy and served 6 years; which included active duty in the Gulf War. After his honorable discharge from the Navy he married his long time Sweetheart Jalpurnia in 1997, from this union they had Isaiah and Isaac Jr. Isaac was a Christian who loved the Lord and always included prayer as his nightly routine. Isaac was a certified CDL driver for over 25 years. He was employed with Penske Logistics. Previous employment included Linens of the Week, Estes, and Dole. Isaac enjoyed many hobbies, including Madden, sharpening his skills on the turn tables, where he would often entertain his friends on Face book and would hit you with the phrase, “DJ Izzy is in the house.” Isaac jokingly had a nickname for just about anyone he came in contact with. Isaac was a “people’s person!” He loved get-togethers, entertaining, and socializing with friends and family. He was a good cook too. He would always want to make sure that enough food and beverage would be available at these events. “And don’t forget the seafood which he loved!” He was a skilled barber and enjoyed cutting the hair of family and friends. This would give him the opportunity to get in your ear with fun, jokes and laughter. Isaac was always available to help family, friends and others with just about anything they needed. He was often seen (and heard) at his son’s football Combines and basketball games. He was so proud of his “boys.” You could hear him yell out during basketball and football games “that’s my boy!” “I made him and I got another one just like him!” He provided the music and transportation for the 302 Elite Athlete events. He was often seen DJing at several social events in the Delaware area. Isaac and a group of his friends started a Non- profit organization called Delaware Sharks & Delaware Heat - Isaac enjoyed mentoring and coaching the youth in football and basketball. He was a fanatic Eagles fan. Issac was loved by so many people; he was the LIFE of the party! A devoted father who was treasured by his sons and daughters, and a loving husband who worked hard and provided for his family and a faithful friend. He cherished his mother, wife, sisters, and grandchildren. He will be sorely missed but NEVER ever forgotten. Isaac was proceeded in death by his father Isaac Handy, Step-father, Leroy Brown, brother Edward Fleming and sister Teresa Fleming. Isaac will be deeply missed and he leaves to treasure his precious memories his mother Hattie Brown, wife, Jalpurnia Fleming, sons: Isaiah Fleming (Niah), Isaac Fleming Jr. and Raymond Anderson. Daughters: Janiyah Fleming and Ieasha Fleming. Sisters: Carolyn Fleming, Myshikka Brown, Cheryl Lynn Brown, and Teresa Fleming.. Brothers: Antonio Brown, Dkwan Brown, Salters Brown Jr. and grandchildren; Isaiah Fleming Jr. and Noah Fleming, Father and Mother-In-Law, Warner and Patricia Trader, Brother-N-Law Warner Trader Jr. (Vichelle) Sister-N-Laws, Linda Benson-Fleming and Crystal Chandler and a host of aunts, uncles, nieces, nephews, cousins and friends. LOVINGLY SUBMITTED, THE FAMILY

The family of Isaac J Fleming created this Life Tributes page to make it easy to share your memories.

Send flowers to the Fleming family.