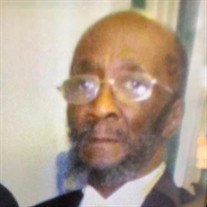 Mr. Hubert "Man" Kinard Sr. was born in Blackville, South Carolina on September 20, 1940 to the late Sammie Kinard and Myrtis Kinard. He transitioned from this life on Wednesday, April 01, 2020 at the age of 79. Hubert received his early education at Macedonia School in Blackville, South Carolina, before starting work at an early age then later moving to Wilmington, Delaware. Hubert Kinard Sr. also known as Man, Pop Pop Man and Uncle Man, was both a loving and caring person. He would talk to any and everybody about his children and grandchildren. He was well loved by all who knew him. His memory was remarkable, he never forgot a birthday or to give a crisp $20 bill for the occasion. Wrestling was one of his favorite pass times and he made sure you watched too, cause he would later quiz you on it. He was a great fan of the Philadelphia Eagles, Phillies Baseball Team and his Westerns. Hubert also celebrated 18 years of sobriety and for anyone who knew, it was an awesome accomplishment. He fought an awesome fight and always with a smile. Also, he was a collector of pennies which he sent to his grandchildren monthly. Hubert never went anywhere without his wallet, just in case he needed to show off his family pictures. He enjoyed playing the lottery which he was quite good at. He truly loved a good cup of coffee and would drink it all day for breakfast, lunch and dinner. Hubert loved hanging out with his son-in-law paying bills, shopping and reminiscing about the old days down in the south. As Kelly would later say, "Always time well spent when hanging out with Pop". He will truly be missed by family, friends and all who knew him. One of his favorite sayings was, " We Don't Say Goodbye.....We Say See You Later!" Hubert was preceded in death by his wife Eartha Inez Kinard, son Hubert Kinard Jr., 4 grandchildren Michael Kinard, Anthony Kinard, Omar Kinard and Terrance Kinard, sister Dorthy Robertson, brothers Richard Kinard, Wilbur Kinard and Cleveland Kinard. He leaves to cherish his loving memory 6 children Linda (Willie) Haynes of Blackville, SC., Anthony Johnson of Williston SC., Claythienl (Raylyn) Kinard, Jackie K (Kelly) Harrison, Ronald (Michelle) Kinard and Anthony (April) Kinard all of Wilmington DE., 20 grandchildren Shakeya, Dwayne, Hubert, Dylan, Anthony D., Ronald Jr., Veronica, Da jan, Careema, Comorra, Ja'ivon, Anthony Jr., Latisha, Claythiena, Brandon, Russell, Tiffany, Tornesha and Willie Jr., Haynes and 20+ great grandchildren.

Mr. Hubert "Man" Kinard Sr. was born in Blackville, South Carolina on September 20, 1940 to the late Sammie Kinard and Myrtis Kinard. He transitioned from this life on Wednesday, April 01, 2020 at the age of 79. Hubert received his early education... View Obituary & Service Information

The family of Hubert Kinard created this Life Tributes page to make it easy to share your memories.

Send flowers to the Kinard family.