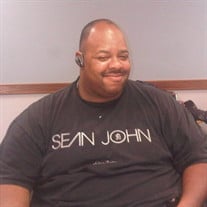 The Reflections of the Life of Gamaliel Lamar Johnson GAMALIEL “LAMAR” JOHNSON JR. was born on August 22, 1966. “Gunzy” as he was affectionately known, was the only child born to the late Gamaliel Lamar Johnson Sr. “Pigeon” And Elaine Morris Sydnor. GOD called Gunzy home to rest on Saturday April 21, 2018 at Bryn Mawr Hospital. Gunzy was christened at Calvary Episcopal Church in Philadelphia. He attended Sunday school at Mount Zion AME Church in Darby. Gunzy was formally educated in the Darby-Colwyn school system, graduating from Penn Wood High School in 1984. He went on to attend and graduate from Delaware County Community College. Gunzy loved sports. As a youngster, he was coached by his father in Darby little league baseball. He played for the Vets. As he got older, Gunzy played for the “Big Macs” baseball team. When he got to high school, Gunzy played football as an offensive lineman for Darby Colwyn High School. Finally, as a senior he played for Penn Wood High School. Gunzy also played baseball while in high school. As an adult, Gunzy worked for Wyeth labs as a security guard for approximately twenty years until the company was bought out by Pfizer Labs. He also worked as a DJ and bouncer for Paradise Alley and a couple of other clubs. Most recently, he assisted his life long friends Benny and John Ferrera at their auto body shop, Twins Autobody in Southwest Philadelphia. Gunzy was always smiling and happy. His classmates and friends continue to talk about how he would light up a room. Friendships were extremely important to Gunzy. He had many friends, but only several close friends. He would do anything to extend himself to help friends and family. He enjoyed traveling with his friends to the shore, New York and other destinations. Gunzy is preceded in death by his grandparents, his father, many of his aunts and uncles, and cousins. He leaves to cherish fond memories: his mother, Elaine Sydnor Johnson, her 3 brothers; cousin and care advocate, Paula Jackson; cousin Brian Sydnor; close friends who Gunzy considered family, Kelvin Robinson, John and Benny Ferrara, Maria Lusi, Eric Erock, Mike Gricco and Rich Meyer; God-daughter Brianna, who Gunzy adored; a host of cousins and friends. Lovingly submitted, The Family

The family of Gamaliel Lamar "Gunzy" Johnson created this Life Tributes page to make it easy to share your memories.

The Reflections of the Life of Gamaliel Lamar Johnson

Send flowers to the Johnson family.