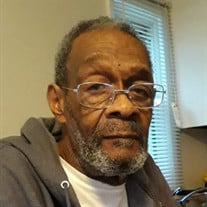 Eugene Calvin Parson, 85, of Wilmington, Delaware better known as Geno, departed this life on April 8, 2020. He was the son of the late William Parson and Geneva Lowry, born March 13,1935 in Davidson, NC. He was the second oldest of eight siblings. Eugene attended Ada Jenkins Elementary School in Davidson, NC and graduated from Torrence-Lytle High School in Huntersville, NC, formerly known as Huntersville Colored School in 1937. While attending Dunbar School in Mooresville, NC, he met his sweetheart the late Catherine Brown. He became gainfully employed as an aide to Ms. Allison, the cook for the Davidson College Fraternity, and traveled with the Davidson College Mentoring Program(Camp) offering assistance with providing meals, chaperoning activities and mentoring the campers. Eugene traveled and settled in Wilmington, Delaware in the mid 1950's, where he established a home and later returned to North Carolina to relocate his sweetheart "Cat" as he called her. They were married in the historic Little Wedding Chapel of Elkton, Maryland on March 14,1955 and from this union were birthed "The Parson 8". His employment history includes working for the Burlington Cotton Mill, the Flour Mill, Lee Tires, Piani's Restaurant, Artcraft Electric Company, King's Inn, Tecot Distributor's and Stolz Plaza Apartments until his retirement. He was a truck driver for Artcraft and Tecot delivering electronical appliances and supplies, corning ware dishes and cookware. Our mother would be so excited to receive these gifts from the distribution companies to share with the family and friends. What a way to smooth over any arguments. His position as a waiter and busboy had its benefits, too. We were able to enjoy cuisines and delicacies from Piani's and Kings Inn restaurants. Eugene was admired for being a family man and provider. He managed to balance a lifestyle of social activities for both his children and his wife. We would "head them up and move them out" in the Rambler and head for Lums Ponds to picnic every week with family and friends. Every year, we looked forward to watching him dress in his dapper attire for the Black and White Ball. Geno was liked by everyone he met. In his leisure time he had an undeniable love for sports. Baseball/softball was one of his greatest pastime with his friends and family on and off the job at Artcraft. We can still hear him say "Hit that ball Willie". He, also was a television sideline sports coach, instructing plays and scolding players. He enjoyed music and dancing (go figure) an invitation to dance "the slop" and a good "blop" with his favorite song artist being the late"Sam Cooke". He served as an usher, a junior deacon and he sang on the choir in the Davidson Presbyterian Church during his earlier church membership. He later joined Friendship U. A.M.E. under the leadership of Reverend Ruth Britt in Philadelphia, PA. A promise is a promise. He had promised her that if she pastored a church he would become a member. Not long before his final months, Eugene had re-dedicated his life to the Lord. Eugene was preceded in death by his loving friend, Catherine Parson and oldest brother William Parson. He leaves to cherish his memories and treasures his life: his surviving siblings; Shirley Parson, of Davidson, North Carolina, James Parson, Verdie Barringer , Melvin Parson(Queen) all of Charlotte, North Carolina, Hilda Heath(William, deceased) of Davidson, North Carolina; three sons, Eudene Parson, of Philadelphia, PA, Calvin Parson (Rhonda) and Travis Parson (Ruthie) of Wilmington, Delaware; five daughters, Deleria Parson, Cathy Grayson (Moses), Shirlanda Miller, Paula Parson, all of Wilmington, Delaware and Tracey Liverman (Ricky) of Newport News, VA; 11 grandchildren, 23 great grandchildren; 3 great, great grandchildren; a host of nieces and nephews: 1 devoted friend Ivory Miller and Moses Grayson a devoted son-in-law.

Eugene Calvin Parson, 85, of Wilmington, Delaware better known as Geno, departed this life on April 8, 2020. He was the son of the late William Parson and Geneva Lowry, born March 13,1935 in Davidson, NC. He was the second oldest of eight siblings.... View Obituary & Service Information

The family of Eugene C Parson created this Life Tributes page to make it easy to share your memories.

Send flowers to the Parson family.