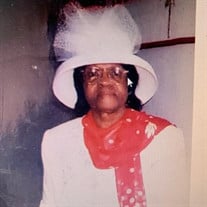 Mother Earline Lawler Mrs. Earline Lawler was the third child and the oldest daughter of Pastor Miranda Twymon Morris and Deacon Jim Morris. She was born on April 29, 1931 in Talladega, AL. Mother Lawler was educated in Talladega where she accepted Christ at an early age. It was that choice that made her the loving mother and friend that many in Alabama and Pennsylvania loved. She married Jesse Frank Lawler in 1950, seven children were born of that union. Mother Lawler was a missionary and homemaker as well as a member of the Chester Church of God. At the age of 88 Mother Lawler transitioned on May 30, 2019 at Christiana Hospital in Newark, DE. She is survived by seven children, Jessie Mae, Gilbert, Billy Joe, Milton (Ora),Kenneth Lee (Carolyn), Edward (Clarice), and Regina (Pastor Lewis Rutherford). She was a grandmother of 25, great-grandmother of 50, great-great-grandmother of 12, loving aunt, loyal sister,and dependable friend. She was preceded in death by her husband, granddaughter, Naysa; grandsons, Charles and Fortune; parents; brothers, Jimmie Lee, Robert Louis, John L. and William; as well as her special nephew, Lorenzo, and other nephews, nieces, cousins, and friends. Mother Lawler raised and educated her children after the untimely death of her husband in 1967. As a single mother and church missionary she assisted with a prison ministry, counseled drug users and dealers, as well as assisted other single parents to actively participate with the rearing of their children. Like most minority couples they escaped the stagnating effects of segregation in order to make a better life for themselves and their growing family. Indiana was their first stop before settling in Chester, PA, where their two youngest children were born and raised. Mother and Reverend Lawler were loving parents. Believing that “Jesus is the way the truth, and the life”, and together they raised their children in that light. Both were members of the Church of God in Chester, most noticeably under the ministry of the Reverend Morris V. Pittman, where Mother Lawler was a part of the Willing Workers, Missionary Board, Choir, and rumor has it she played a mean drum while leading the congregation in praise and worship. After the death of her husband, she cared for her family during the day and taught the older children how to find a job to help support the family. She was not one who believed in being idle. Though times were hard she made a way for God first and family. She believed and taught that God will take care of the family. She helped raise most of her children’s children and thank God, still had time to watch and hold her great and great-great grandchildren, five generations! Even after a stroke left her partially paralyzed, she was still active in praising God and helping with the upbringing of her family. Submitted by The Lawler Family

The family of Earline Lawler created this Life Tributes page to make it easy to share your memories.

Send flowers to the Lawler family.