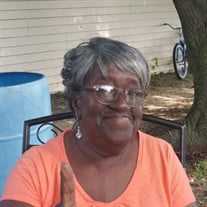 Doris D. Smith was born on July 23, 1940 to the late John H. Cooper and Mildred E. Cooper. She departed this life on August 5, 2020. Doris received her early education in Wilmington, DE. Then she moved to Kirkwood, DE with her family and was bused to Middletown, DE to attend Louis L Redding High School for Blacks and graduated in 1959. Doris met James (Jimmy) Duker at Louis L. Redding; they married and had 4 children from this union Deborah, Charlena (Sherry), Gregory and Tracey. Doris attended Goldey Beacom College for a short time taking Secretarial Courses. She drove a school bus for a few years until it snowed and the bus turned sideways in the road (She was done with that). She worked at MOT Head Start; then worked at MOT Community Action with Ms. Carrie M. Cale until it closed. She worked at Sentac Drug Rehabilitation and Reflections in Delaware City, DE until retirement. Mom loved getting up every morning drinking her Cappuccino and smoking her cigarettes. She loved doing her Seek and Find puzzles, reading, crocheting and her collection of ducks. In addition to her parents Doris was preceeded in death by two children (Deborah (Debbie) 2000, (Gregory 2016), her sister Janice M. Lindsey, one sister in law and 3 brother in laws. She is survived by two daughters Charlena (Sherry) Chris of Towsend and Tracey of New Castle. Nine grandchldren; Chris Jr, Kevin, Kory and Tyrone Watson, Brandon, DeRon and Ryan Duker, Amber Marie Shire-Duker and Azaria Hynson. Twenty-one Great grandchildren. One devoted Great grandson Nehemiah, whom she helped raise until her health started failing. Two Great great grandchildren Kehlani and Kaden, one devoted nephew Eddie Lindsay; five God daughters; five brother in laws, five sister in laws and her devoted friends who called to check on her everyday, Leo Smith, Bernice Saunders, Kim Cheatwood and Anita Petroulis and a host of nieces, nephew, cousins and friends.

Doris D. Smith was born on July 23, 1940 to the late John H. Cooper and Mildred E. Cooper. She departed this life on August 5, 2020. Doris received her early education in Wilmington, DE. Then she moved to Kirkwood, DE with her family and... View Obituary & Service Information

The family of Doris Smith created this Life Tributes page to make it easy to share your memories.

Send flowers to the Smith family.