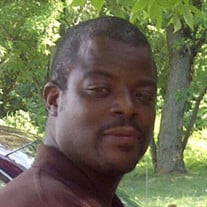 Dondell “Smoke” Parrish was born on September 21, 1968 to Julius C. Parrish Jr. and Lavern Dawson Parrish. He peacefully departed this life on September 18, 2020. Dondell attended and graduated from Howard Career Center in Wilmington, DE. He completed his high school diploma with a specialized skill in culinary arts. Dondell fully utilized his skills and passion for cooking whenever he had an opportunity. During his life he held positions in the workplace as a short order cook or line cook. His passion for cooking was undeniable. Dondell later in life moved to Pittsburgh where he lived for many years reestablishing himself. The one thing that stood true throughout his life was his love for people. Dondell had a heart of gold and loved his family and friends unconditionally. He had his challenges as many do in life, but one thing he believed in was fighting through to do better. For those he loved, he never went without confessing how much he loved them. Dondell’s love was so deep and unconditional that he would go off on you and still say I love you when he was done. He truly represented Agape love. In addition to his love for people, he lived up to his purpose in life to be a helper. If you called on him for help with anything, he made it his business to be there to help on time. Dondell was known to love, have fun, party, cook, and do a dance he called “the hully gully”. If you knew Dondell than you know what that dance was. Other favorite things he enjoyed doing were talking, listening to the Blues & Marvin Gaye, watching action flicks and his love for westerns movies… And boss everyone around. He was preceded in death by his mother Lavern Dawson Parrish (1974). He is survived by his siblings from his mother, which are Julius Parrish, Anthony Parrish (Carolyn) and Yolanda Parrish, other siblings are Julius Harris, Nasheena Gaines (Edward) and Robert Martin, and the love of his life his father Julius C. Parrish (Regina). Also, his favorite cousin Zina B. Marshall, best friend James Wright, Aunt Rita Lyons, Aunt Scythell P. Brown, Uncle Preston Parrish, Uncle Stanley Lyons, nieces Yanel L. Parrish, Yazmin L. Parrish and great nephew Destin Parrish and a host of nieces, nephews, and cousins.

The family of Dondell Parrish created this Life Tributes page to make it easy to share your memories.

Send flowers to the Parrish family.