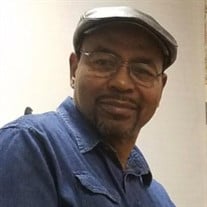 DeVaughn Boyd Sr., son of the late Henry Williams and Josephine Boyd was born Thursday, March 31, 1955 in Philadelphia, Pennsylvania. The Lord peacefully called him home on Wednesday, December 19, 2018. The love he received during his life continued in his final hours, for he was not alone, but surrounded by his loved ones. DeVaughn was affectionately called "Boobie" by his family and close friends. During his childhood years, DeVaughn protected his brothers from bullies and made sure his sisters were treated with respect. He primarily resided in Philadelphia, Pennsylvania but also called Jacksonville, Florida his home. Educated in the Philadelphia School District, he later went on to receive his Bachelors Degree from Cheyney University. In the fall of 1977, he became a member of Kappa Alpha Psi Fraternity, Inc., Gamma Omega Chapter. In college, DeVaughn met and later married Patricia Patrick, producing two children of whom he loved. DeVaughn was employed by the United States Government as a computer engineer for the Department of Navy Aviation and spend almost two decades in sales. He was dedicated to his jobs and exceptionally skilled at what he did. He was very detailed and thorough and his experience and charisma assisted him in exceeding his sales goals. He was able to negotiate and had the keenness to sell water to a whale. Despite his numerous achievements, he always remained humble and kept his focus on God. DeVaughn was very vocal about the two things that meant the most to him, which were God and his family. DeVaughn accepted Jesus Christ as his personal savior and he truly loved the Lord. It was rare to have a conversation with him without him sharing the goodness of the Lord or praying for someone. While in Jacksonville, Florida he remarried to Michelle Boyd. They had three beautiful children, whom are known by their siblings as the babies of the family. The love DeVaughn had for all his children was evident. He treasured his children and embraced every moment with them. They meant the world to him and he let everyone know it. He especially enjoyed being a grandfather and was called "Pop-Pop" and "Grandpa De" by his grandchildren who adored him. DeVaughn was very outgoing, had a great sense of humor, and possessed a special light that beamed where he went. He thoroughly enjoyed playing chess, had an enormous heart that loved unconditionally and deeply loved his family and spending time with them. DeVaughn was known for his quick wit, infectious smile, creativity and his kind and compassionate spirit. He would rarely walk out of the house without wearing one of his signature Kangol hats. An avid music lover, he particularly enjoyed listening to gospel, jazz and his favorite oldies. He was very articulate and enjoyed convening with people, especially his children and family. He always knew the right words to may encourage others, making things better, while strengthening and renewing their faith in the Lord. DeVaughn will forever be remembered by his children, Quinton Bond, Theresa Ellerbe (Allen), Letitia Wood (Brian), Denae Johnson, Saundra Boyd, DeVaughn Boyd Jr., Josephine Boyd and Isabel Boyd; grandchildren, Jamal Ellerbe, Zion Jackson, Jasmine Ellerbe, Layla Wood, Mariah Dabney and Javiah Ellerbe; siblings, Eugene Boyd (Regina), Clifford Boyd (Brenda), Wendel Boyd (Sabrina), Theresa Boyd, Starr Davis (Johnny), Henry Boyd (Linda) Joseph Boyd (Patricia), Lessie Boyd, Sheldon Boyd and Doris Powell (Artez); his friend, Cynthia Smith; and a host of cousins, nieces, nephews and friends. DeVaughn always said that this life is temporary, always remember the important things while living and keep your focus on the Lord! He didn't allow anyone to say goodbye, instead he'd quickly corrected them and said "It's so long or I'll see you later!. It's never goodbye!" So, although he will be truly missed by his children and loved ones, let us remember that we are not saying "goodbye" because we will see him again! Lovingly submitted, The Family

DeVaughn Boyd Sr., son of the late Henry Williams and Josephine Boyd was born Thursday, March 31, 1955 in Philadelphia, Pennsylvania. The Lord peacefully called him home on Wednesday, December 19, 2018. The love he received during his life... View Obituary & Service Information

The family of DeVaughn Boyd created this Life Tributes page to make it easy to share your memories.

Send flowers to the Boyd family.